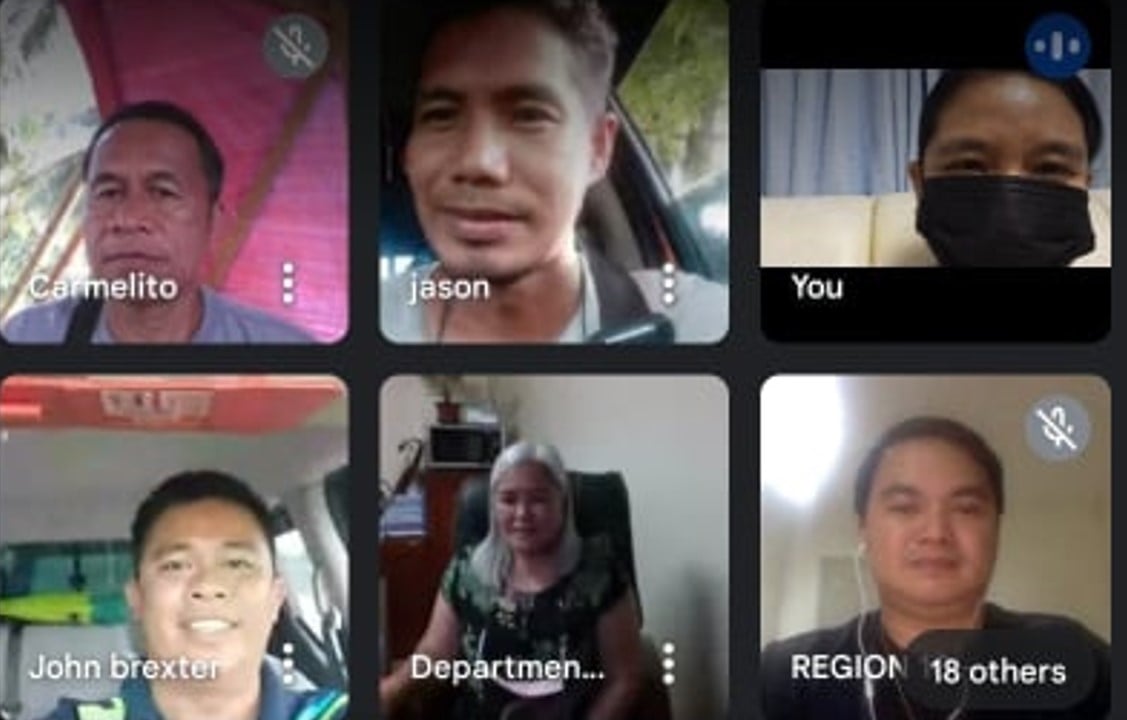 DA-NorMin in partnership with participating seed companies is set to showcase the performance of different hybrid corn varieties at its research stations.

The department with representatives from the private seed companies, convened in a meeting to finalize agreements prior to the start of planting.

It will be housed in a two-hectare area apiece in the agency’s different research centers.

Different corn varieties will be featured in the derby, where each variety will be planted to a 1,250 square meter land using the agreed standard planting protocols by the group.

On the other hand, DA-10 researchers will be provided seeds by the participating companies to be planted in a separate set up using its developed technologies such as balanced fertilization, biological control agents, organic fertilization, among others.

Majority of the harvests at the end of the showcase will be donated.

Ultimately, the performance of exhibited corn varieties will help the agri department in the procurement of hybrid GMO corn seeds, with the preferences of local government units and farmers being factored in the selection. # (JLO) 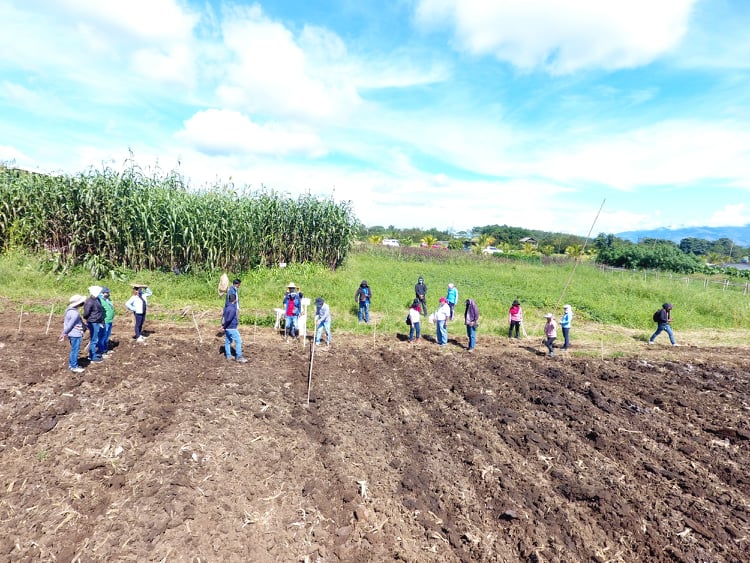 The conduct of a corn derby in DA’s research centers kick off at NMACLRC, Dalwangan, Malaybalay City, Bukidnon.

MALAYBALAY CITY, BUKIDNON – To showcase the different varieties and technologies of hybrid corn seeds available in the local market, the Department of Agriculture – Regional Field Office 10 (DA-RFO 10) conducted a Corn Derby in the research centers.

The activity kicked off with a ceremonial planting on October 25 at the Northern Mindanao Agricultural Crops and Livestock Research Complex (NMACLRC) in Dalwangan, Malaybalay, City, Bukidnon which aims to test the different corn package of technologies (POT) for corn farmers to adopt in their respective areas.

DA-10 Regional Executive Director Carlene C. Collado emphasized that the results of the derby will be one of the basis for the seed procurement through its Corn Program.

Regional Technical Director for Operations Carlota S. Madriaga said that, the results of the derby will be one of the basis for location specific recommendations in the different agro ecological zones.

Production technologies from land preparation to harvesting were thoroughly discussed and agreed upon for implementation.

All farm operations to be conducted by the respective companies will be properly recorded and they will also submit their production technologies for transparency.

While the DA research centers will conduct a research-managed demo of all the varietal entries in order to have a basis of comparison. 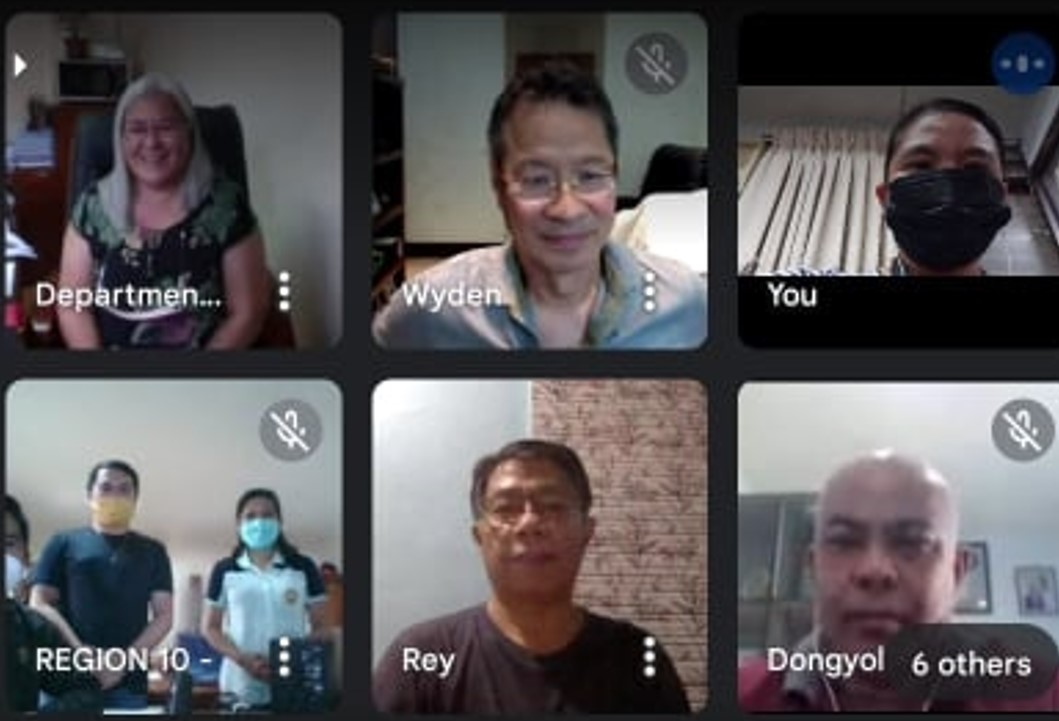 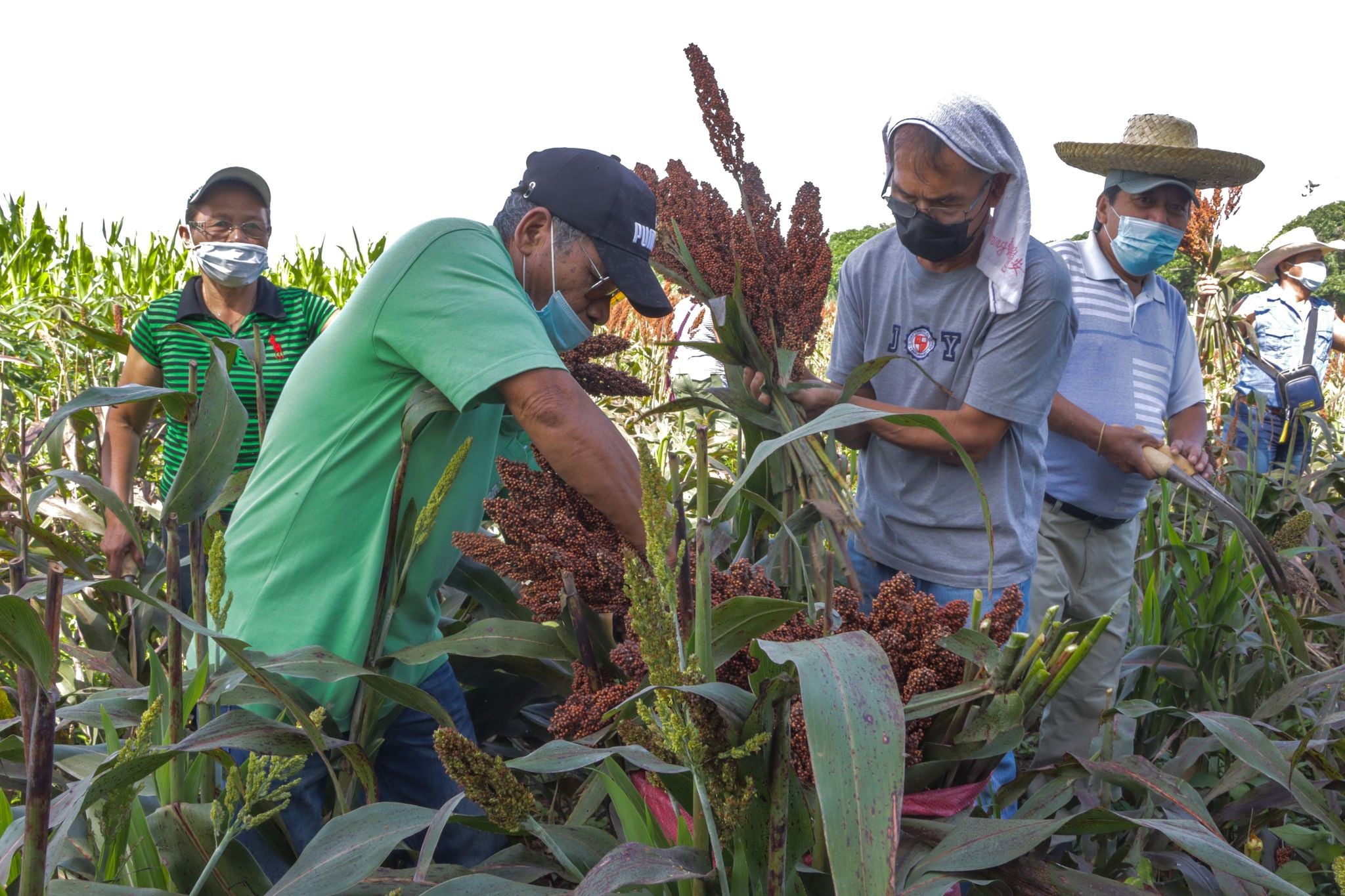 The establishment of a sorghum model farm regionwide is one among the initiatives of DA-10 in partnership with LGUs and farmer-cooperators, to promote its production and marketing  as alternative raw materials for feeds.

On October 19, farmers, agricultural extensionists from the different local governments (LGUs) of Misamis Oriental, municipal residents and officials, explore the cultural management practices and production technologies of the crop, including its utilization and current demand in the market, for replication in their respective farms and localities.

“Through the techno demo, we can determine the adoption of sorghum in your location given the appropriate package of technology,” Jurrybe J. Lachica, DA-Regional Field Office 10 (DA-10) sorghum focal person remarked.

While the department has started reintroducing sorghum since 2018, he added, that the crop is given a boost earlier this year through Secretary Dar’s memorandum order 15, as part of the commodities under DA’s Corn program.

Further noting, that for the year 2022, the agency through its Livestock program has set aside P2 million for seeds alone, as sorghum is mainly seen as a substitute raw ingredient for animal feeds, on top of the P100,000 allotted by the Corn Program.

Following implementing guidelines, ten hectares is required for the establishment of a sorghum model farm.

On one hand, DA-10 grants project implementers such as seeds, fertilizers, and technical expertise, with assistance from partner LGUs.

On the other hand, cooperators counterpart for labor and area.

Urging others to engage in the cultivation of sorghum, Dannie Baldado, an area coordinator from San Miguel Foods, Inc. bared, that their company is in need of sorghum.

“Besides imports, SMFI is willing to buy the produce of our local farmers, as a way of also extending help to them being among the company’s patrons for our food products,” he said.

Offering his one-hectare rented land as the town’s pilot site, Danilo Buntag of the Villanueva Corn and Cassava Association, Inc. served as the farmer-cooperator for the sorghum model project.

“I am thankful that I’ve volunteered to grow sorghum in my area after being introduced to such crop through DA’s training. As I have witnessed first-hand its potential as a resilient crop, which requires lesser maintenance and with an assured market, I encourage others to also engage in sorghum production in their respective areas, to help expand the development of the crop,” he accounted.

Out from the activity, projected yield is reportedly eyed at 5 tons, and at a farmgate price pegged at P10.50 per kilo for sorghum grains, farmers can generate a net income of P21,215 with total expenses amounting to P31,285.00.

This coming November, another field day is slated within MisOr province, with the learning site at barangay Hinaplanan, Claveria. # (JLO) 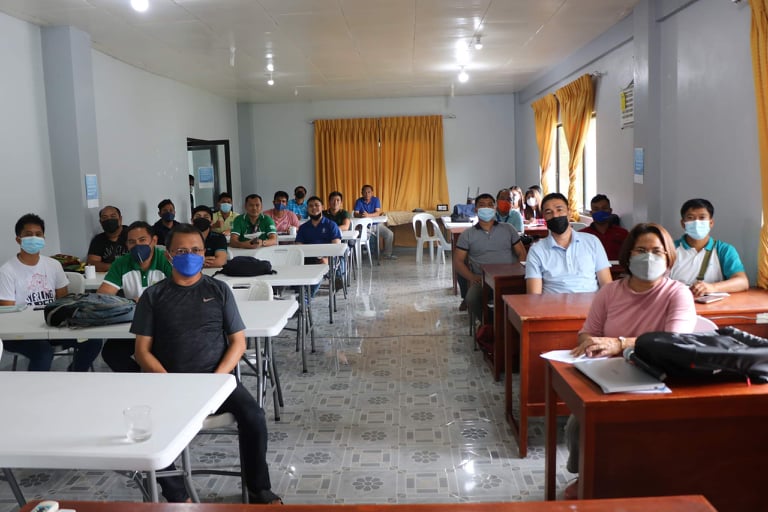 DA-NorMin convenes with representatives from rice seed companies on October 22 for the implementation of a 50-hectare hybrid rice techno farm at CMU, Musuan, Maramag, Bukidnon.

Said meeting was conducted to plan for the next planting season for the 50-hectare hybrid rice techno demo farm at the Central Mindanao University in Musuan, Maramag, Bukidnon. 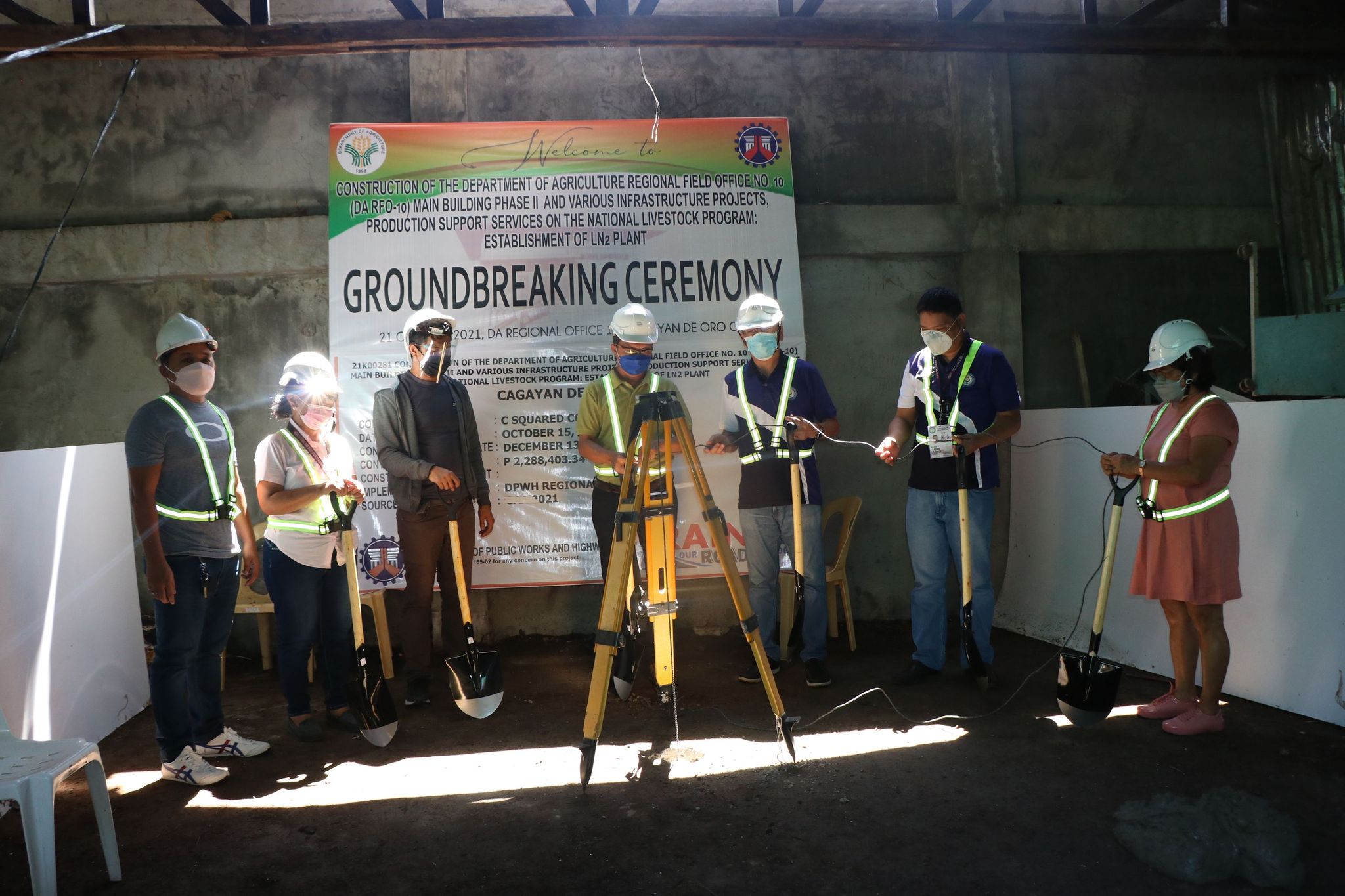 Dir. Collado said that Misamis Oriental is the first province in Northern Mindanao to receive the said intervention.

“The LNP will boost the livestock industry of the province, benefiting livestock raisers in upgrading their stocks,” Collado added.

The project is in support of the DA Livestock Program’s Genetic Improvement Program, in which the Unified National Artificial Insemination program (UNAIP) is one of the major concerns.

Ma. Lourdes M. Sypiecco, DA-10 Livestock Program Coordinator shared, “The establishment of the project is in response to the need of a constant availability of liquid nitrogen as one of the logistical components of successful AI programs.”

Sypiecco added that the UNAIP was conceptualized to provide better opportunities for livestock farming communities by enhancing productivity and competitiveness through institutionalized AI delivery systems.

“Common issues that arise from regular program monitoring and reviews are the availability of Liquid Nitrogen for proper storing and transporting of semen,” said Sypiecco.

Dr. Resma said that the project will be a big help for the whole of Region 10 especially for the genetic improvement of the animals.

“Now, we will have our own liquid Nitrogen plant in the province. We hope it will be helpful to the farmers for the improvement of the livestock,” Resma concluded. #(ATCabig)

CAGAYAN DE ORO CITY –The Department of Agriculture in Northern Mindanao has allocated P14 million worth of agri interventions to Tangub City to boost its agri development.

DA Undersecretary for Consumer and Political Affairs Kristine Y. Evangelista in her recent visit to Tangub City, bared the agri interventions for the city government and the Northwestern Mindanao State College of Science and Technology.

USec. Evangelista said, “DA 10 through Regional Executive Director Carlene C. Collado takes care in ensuring that the stakeholders will be given what they need, and what they can get and operate.”# (ATCabig) 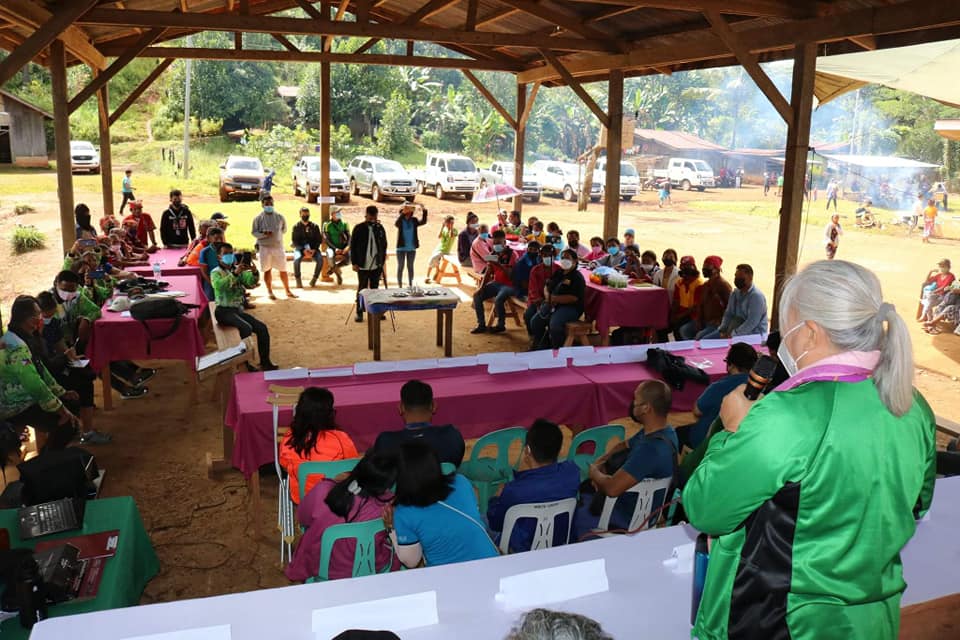 DA’s 4Ks and MIADP teams conduct a community orientation in preparation for the full implementation of MIADP, which helps organized farmers in ancestral domains.

The DA-MIADP is a World Bank-funded project which aims to sustainably increase agricultural productivity, resiliency, and access to markets and services of organized farmer and fisherfolk groups in said ancestral domains. 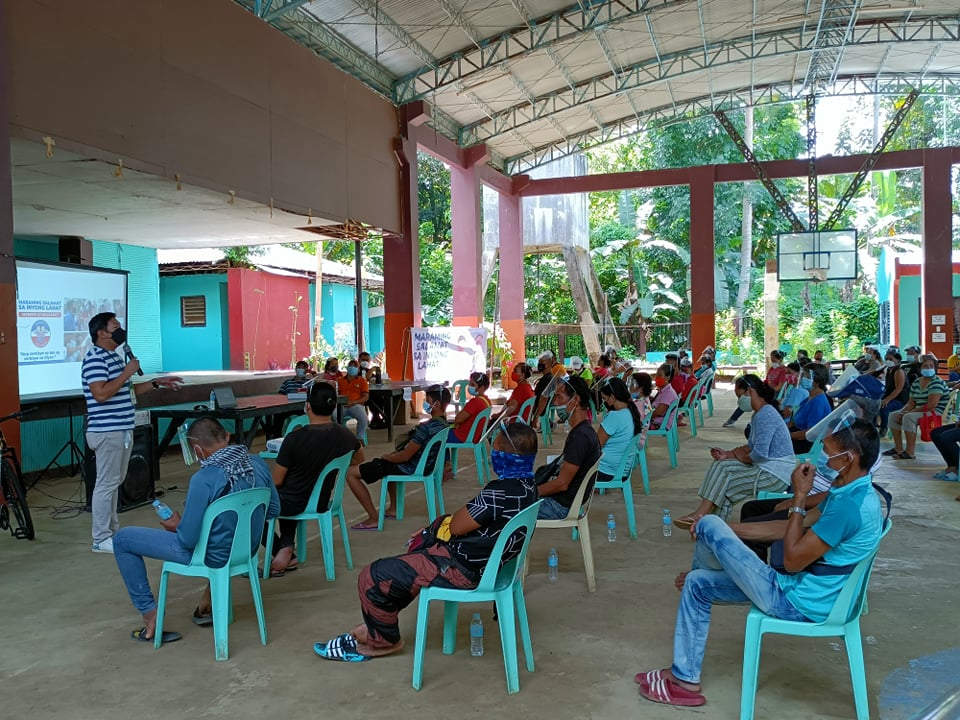 On October 21 at the Taglimao Covered Court, a total of 70 farmers with 327 heads of culled hogs were compensated following the depopulation measures imposed by the agri department to curb the spread of the hog viral disease.

In an interview, Annie P. Abragan of barangay Taglimao, who had the most culled hogs in the batch conveyed, “I understand the government’s efforts in preventing the spread of ASF which is for everybody’s welfare.”

She added, that the amount she received will serve as a startup to engage in small business.

DA indemnifies hog raisers at P5,000 for every culled hog on the account of the ASF.

Capping the week’s payout, 443 farmers received their cash assistance amounting to P9.730 million for their 1,946 culled hogs since DA-10’s distribution on October 19. # (RDMElloren) 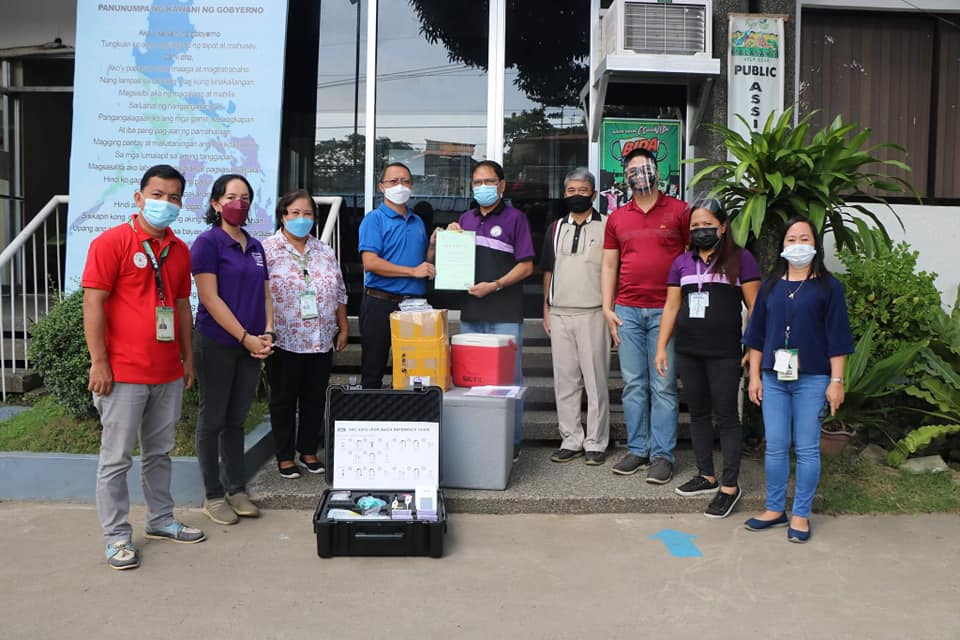 After which, a demonstration was done to capacitate personnel on the usage of said equipment.

“We are thankful to DA for the test kits that we have received. This will greatly help our surveillance efforts, especially that the province is aiming towards returning to being a ‘green [ASF-free] zone’,” shared Misamis Oriental Provincial Veterinarian Benjamin S. Resma.

Dir. Collado noted, that apart from reinforcing its biosecurity measures, the agency continues to implement its programs and services to mitigate the effect of ASF such as offering alternative livelihood projects and the distribution of ASF indemnification to the affected hog raisers. # (AMBManto)