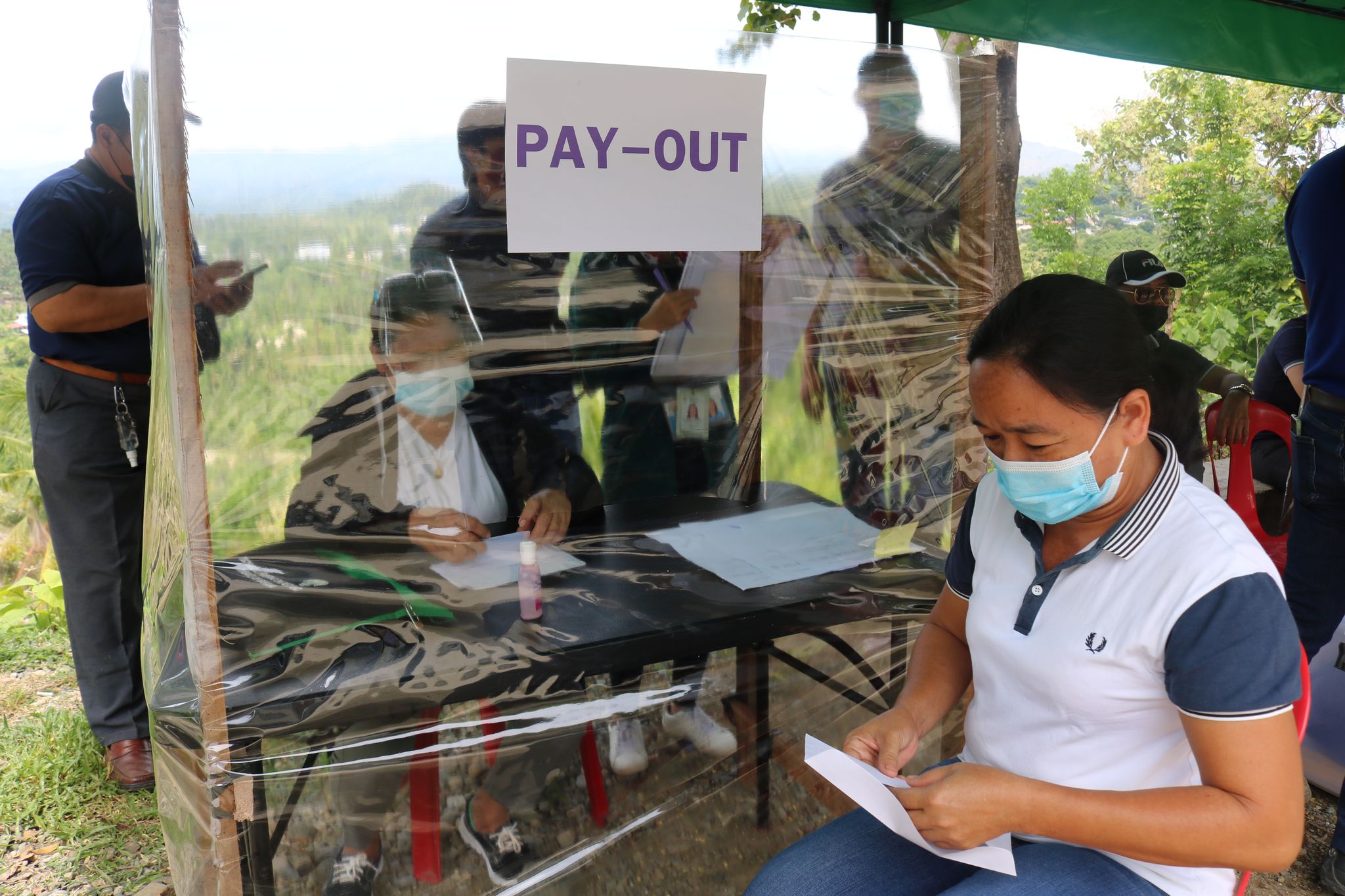 CAGAYAN DE ORO CITY – A total of 24 hog raisers from the municipality of Laguindingan, Misamis Oriental received the African Swine Fever (ASF) indemnification fund in the total amount of P360,000 from the Department of Agriculture – Regional Field Office 10 (DA-RFO 10).

On Tuesday, July 6, 2021 affected hog raisers from Barangays Kibaghot and Poblacion each received P5,000 per culled hog to recover from the losses of said disease.

Meanwhile, Laguindingan Mayor Diosdado T. Obsioma extended his gratefulness for the cash assistance, and encouraged residents to use the money wisely for other livelihood endeavors.

Hog raiser Benjie M. Suminlao accounted, that he will be using the indemnity fund for other livestock, “Since it may take a while before we can start raising hogs again, I will be using the money to buy vitamins for my cattle, goats and chickens.” 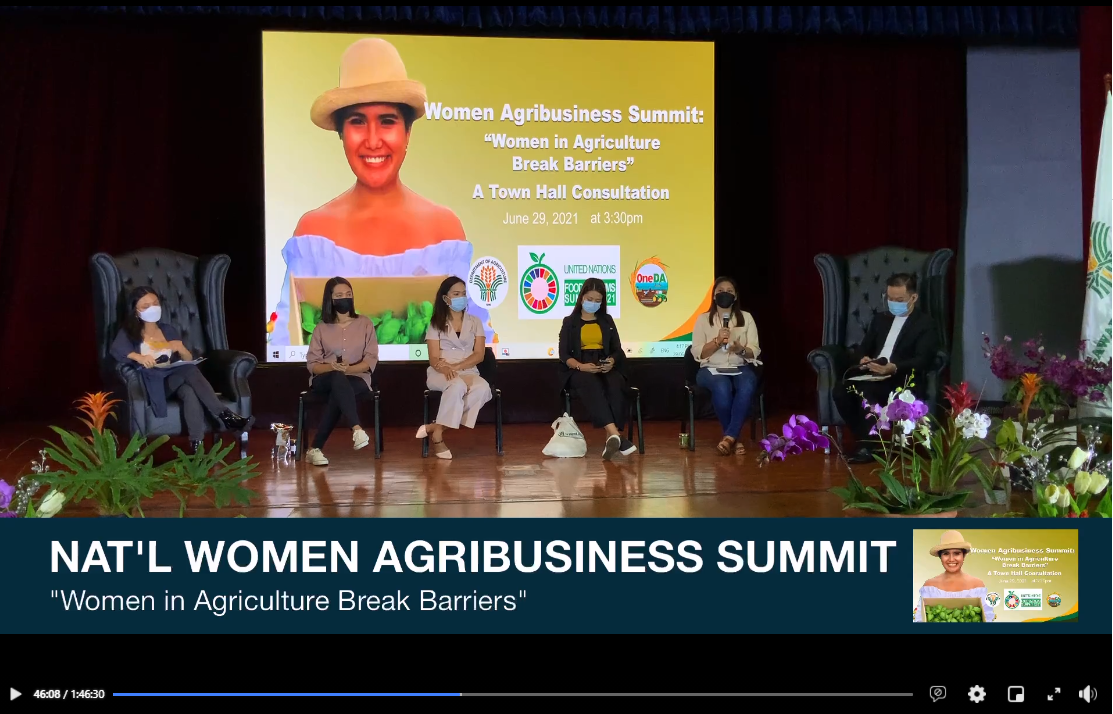 DA holds the first ever Women Agribiz Summit which underscores the efforts of women in creating a mark in the agribiz industry with help from government agencies.

Organized by the Gender Equality and Social Inclusion Program Directorate Office and Gender and Development (GAD) Focal Point System, said event highlighted the efforts of women in partnership with DA, its attached bureaus and agencies, including other government agencies in helping them create a mark in the agribiz industry.

Moreover, it forms part as one of the preparatory activities of the 2021 United Nations (UN) Food System under the Thematic Area of GAD to be convened in September, this year.

In her opening remarks, Evelyn G. Laviña, undersecretary for high value crops and chairperson of GAD Focal Point System expressed, “women all over [the country] who are in agriculture and agribusiness never surrendered to the debilitating and paralyzing effect of the pandemic to the simple Filipino people and their livelihood.”

She added, that instead the innate strength, determination and resilience of Filipino women found an unexpected stage to manifest itself in an incomparable manner, breaking barriers and helping transform the Philippine agriculture during COVID-19 and beyond into a dynamic and resilient sector essential for the country to speed up recovery by ensuring strengthened food value chains and a vibrant rural economy.”

USec. Laviña furthered, that the event aims to share the invited outstanding women’s success stories for others to draw inspiration from, underscoring what they’ve accomplished, how they’ve hurdled challenges amid the ongoing pandemic and accessed government services to enhance their entrepreneurial activities.

DA Secretary William D. Dar reiterated, that said affair also highlights on working towards the adopted fifth goal of UN’s Sustainable Development Goals, which is the enforcement of gender equality.

While efforts are being done by gender advocates globally, the DA chief equally recognizes in bridging the gaps to address such goal in the society.

“We know that one of the gender issues that surfaced in studies is women’s lack or limited access to services that will improve their productivity and income and this is being given primordial consideration in the crafting of the yearly GAD plan and budget of the department,” the secretary pronounced.

Some P5.51 billion were allocated by DA-Central Office, its regional field offices and bureaus out of the consolidated budget of P32.41 billion from the General Appropriations Act, while DA’s attached agencies and corporations have also apportioned amounts for GAD activities in accordance with their mandated functions, Dar reported.

“With one resolve [by the One DA family], we continue our quest to empower women. We have made sure that the registry of farmers and fisherfolk reflects is disaggregated into male and female, so much so that we will be able to project in our planning and implementation women’s inclusion in the targeted beneficiaries of DA’s various services,” he added.

The agri secretary also noted, that registration is still ongoing and he extends his hopes that more will register and be able to access government services that would aid them in their agri-fishery based activities and enterprises.

For Northern Mindanao, DA-10 facilitated the attendance of around 15 delegates on-site in the city of Cagayan de Oro from its employee’s association, Agribusiness and Marketing Assistance and Field Operations divisions. #(JLO) 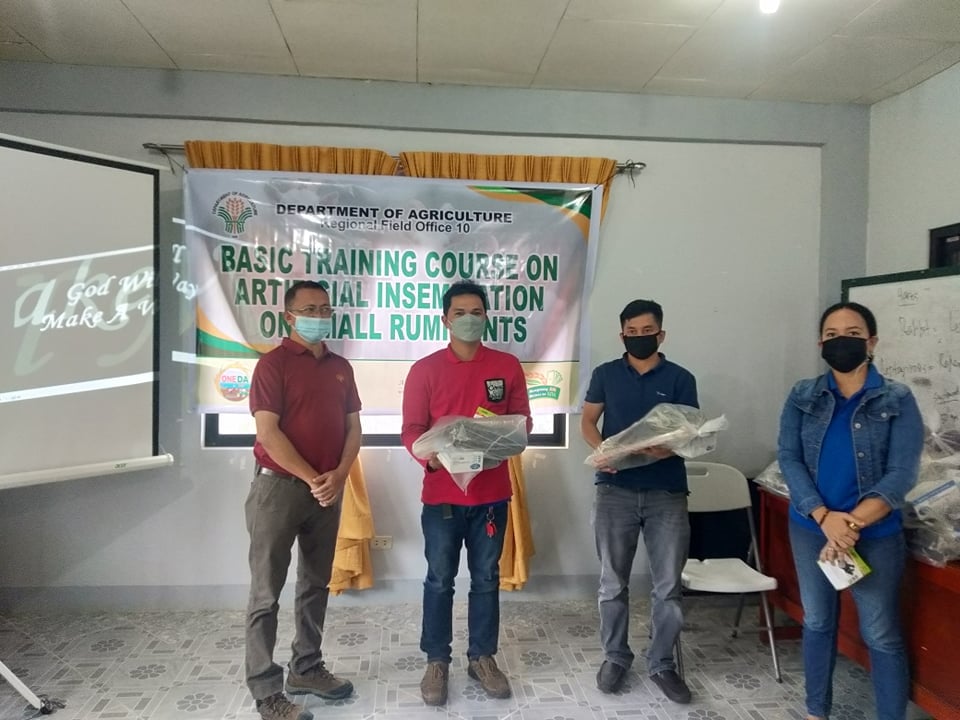 “The training will equip the technicians with different skills and techniques in AI,” said Regional Executive Director Carlene C. Collado of the Department of Agriculture-10 during its opening program at the department’s Malaybalay Stock Farm in Dalwangan, Malaybalay City, Bukidnon.

Through DA-10’s Livestock Program, the training aims to capacitate the technicians in handling AI in goats to perform activities in the field using the highly technical small ruminant AI technique.

Collado added, it will enable them to train goat raisers in their respective locality on goat production, and eventually achieve DA’s main objective on increased livestock production in the region.

“Artificial insemination is a breeding method used to avoid inbreeding which causes poor growth and prone to transfer of diseases,” according to Johnson C. Petalcurin, Regional Artificial Insemination Coordinator of DA-10’s Livestock Program.

He explained that it is also the easiest way of increasing and upgrading small ruminants in the locality and increase farmers profitability.

The ten-day training will allow the participants to do actual insemination and pregnancy diagnosis on small ruminants and estrous synchronization in their assigned area of coverage. #(ATCabig) 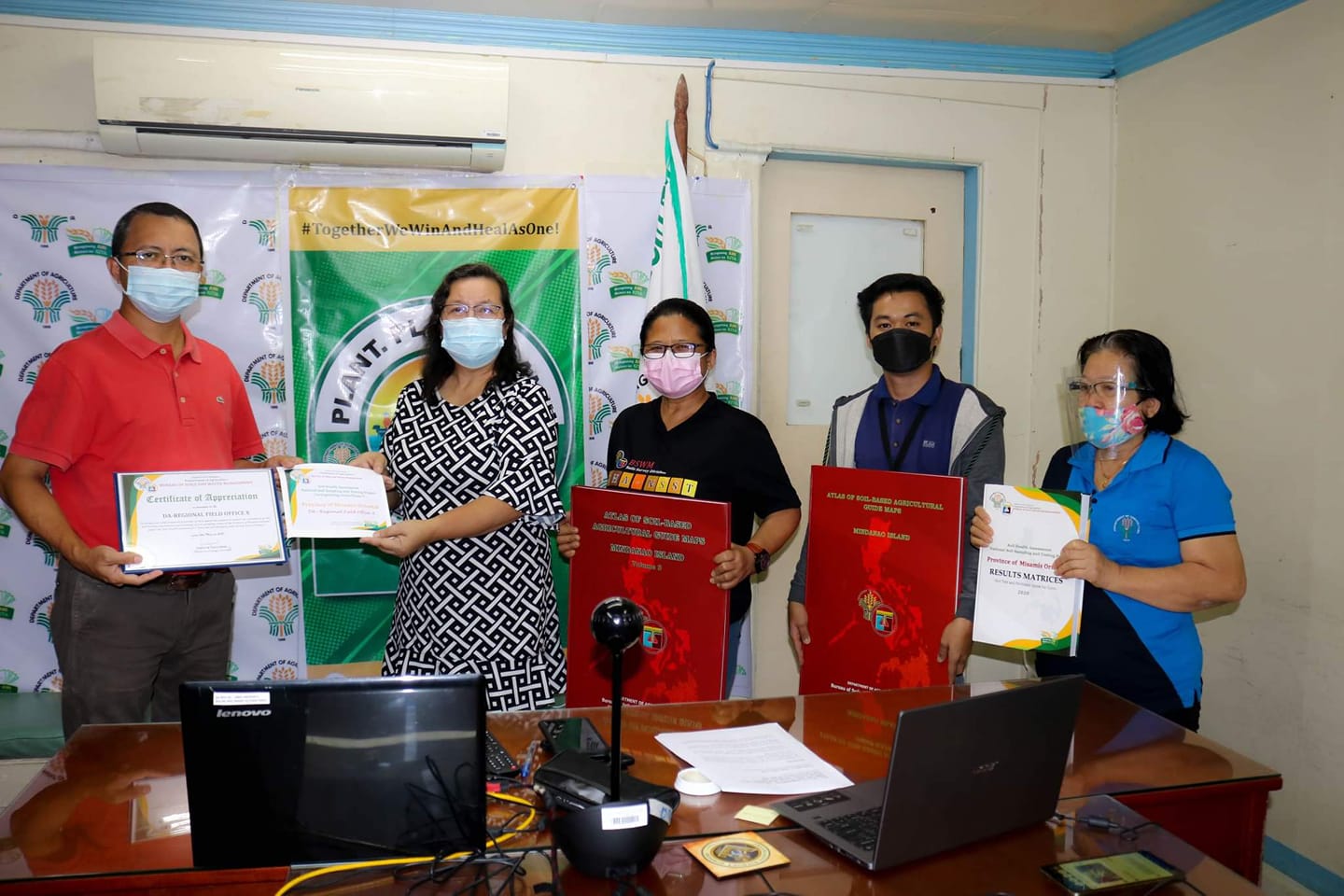 On June 30, BSWM turns over the updated soil fertility maps for rice and corn to DA-10 and PLGU MisOr as source of information on soil fertility status and suitable crops to be planted for specific soils, among others.

DA-BSWM Director Engr. Pablo M. Montalla witnessed via online the handing over of Volumes 3 and 4 Atlas of Soil-Based Agricultural Guide Maps and the Soil Test and Fertilizer Guide for Corn for Misamis Oriental to DA-RFO 10 Regional Executive Director Carlene C. Collado on June 30.

RED Collado noted, that President Duterte has committed in his State of the Nation Address in 2016 the color-coded agricultural guide maps, as part of his legacy under his administration.

RED Collado imparted, that the region has a total of 129,799 hectares of land planted with both white and yellow corn varieties, primarily produced for livestock feeds and human consumption. Of these, MisOr has devoted 16,670 hectares for corn production.

“For this, I would like to congratulate DA-BSWM for this feat in guiding our farmers boost their agricultural production. Importantly, it provides farmers and other stakeholders information on soil fertility status and suitable crops to be planted for specific soils, including its climate and geographical location. Indeed, this is a remarkable milestone of the department,” the director expressed. 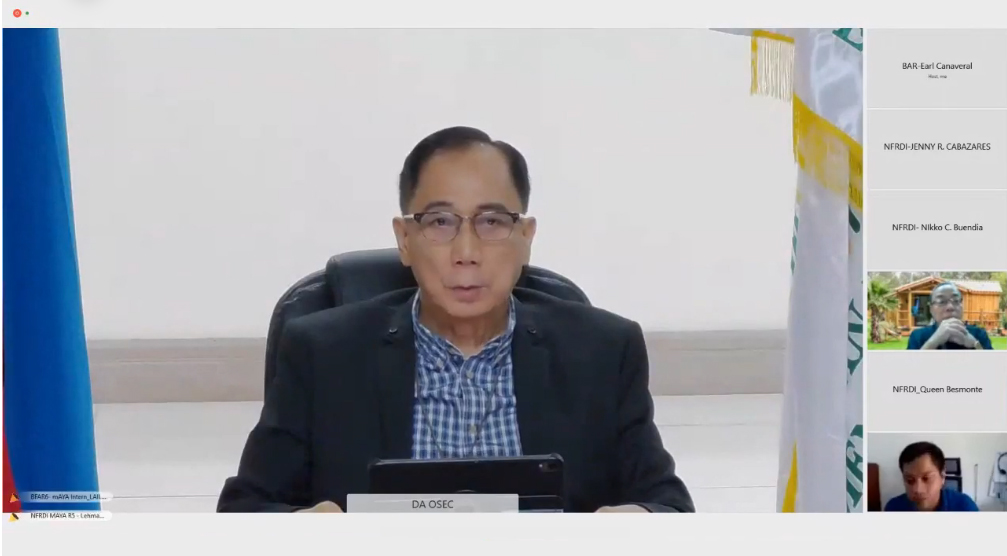 DA helmed by Sec. Dar leads in honoring the interns of the agency’s MAYA program.

CAGAYAN DE ORO CITY – To acknowledge notable interns during the conduct of the Mentoring and Attracting Youth in Agribusiness (MAYA) Program, the Department of Agriculture conducted its virtual recognition day on June 29, 2021.

Sixteen interns from the Department of Agriculture – Regional Field Office 10 (DA-RFO 10) formed part the pioneer batch of 791 interns who finished their internship in the different main and regional offices of DA, including its attached agencies and bureaus.

Jimae Faith B. Magnaye from DA-10 was named among the 26 “Best Maya Interns” for showing exemplary performance during the program.

In his message, Secretary William D. Dar shared, “Many of our youth are not trained and educated to their maximum capacity and are not making their maximum contribution for the society.”

The DA chief further explained that the agency created the MAYA program, which does not only offer hands-on training and mentorship to the youth, but also gives them a step towards career development. “The department sees the program as a continuing process – investing in people through training and mentoring as a national investment. It yields tangible returns in economic growth and improves citizenry and higher standards of living,” he added. 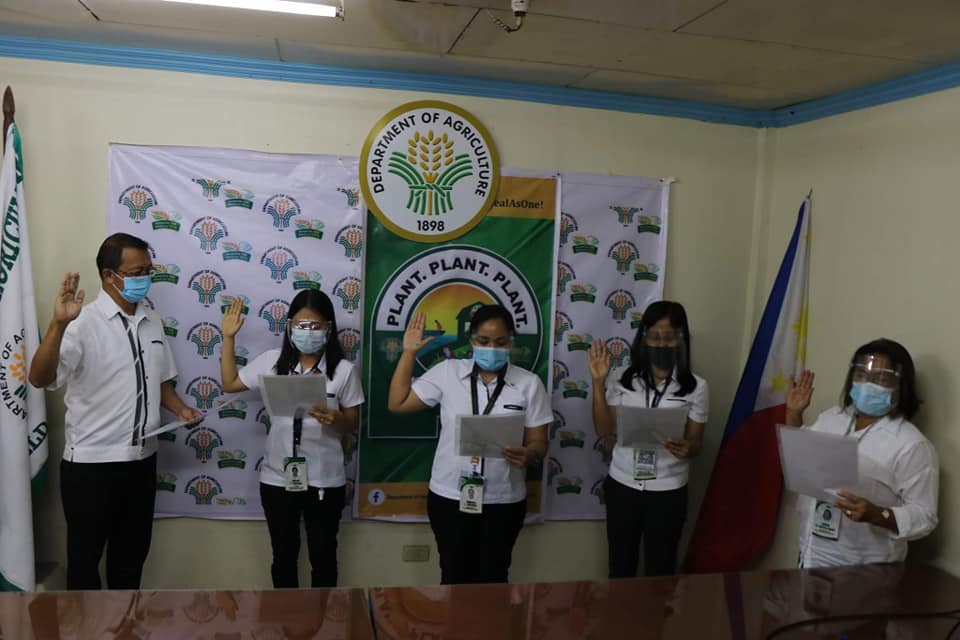 DA-10 RED Collado administers the oathtaking of some promoted employees of the agency.

The following are the employees and their designated posts:

Dir. Collado stressed to the newly promoted and appointed employees on the agency’s call for good governance and zero corruption in serving the Filipino people with utmost integrity and competence.

Witnessing also is DA-RFO 10 Regional Technical Director for Operations and Placement and Selection Board Chair, Carlota S. Madriaga who challenged them to adhere with the agency’s vision for a food secure and resilient Philippines with prosperous farmers and fisherfolk.# (JCAnito) 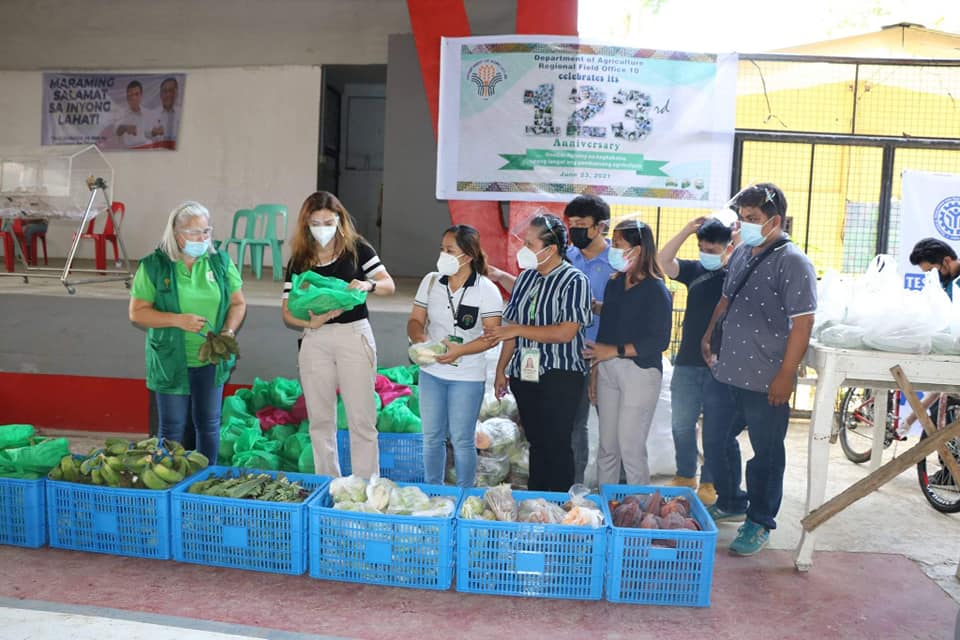 In a virtual orientation, DA-10 RED Collado encourages all hog raisers of R-10 to apply for the insurance of their hogs to DA-PCIC.

Collado’s call is relative to the memorandum issued by DA Secretary William D. Dar that starting July 1, 2021, African Swine Fever (ASF) indemnification requests for depopulated hogs will not be accommodated under the Quick Response fund (QRF) but under DA-PCIC Insurance.

In a virtual orientation called by Collado which was attended by the provincial, city, municipal veterinary/agriculture offices of Region 10, the DA-PCIC 10 laid down the guidelines for the implementation of Swine Industry Insurance Program.

It include discounted premiums to commercial hog raiser, increased indemnity payment for hog losses and inclusion of culling or destruction of swine due to ASF as ordered by the government as compensable peril.

PCIC 10 Regional Manager Charlito Brilleta emphasized, that the program aims to provide insurance cover to backyard and commercial hog raisers who continue with hog farming and help mitigate the risk to their investments. 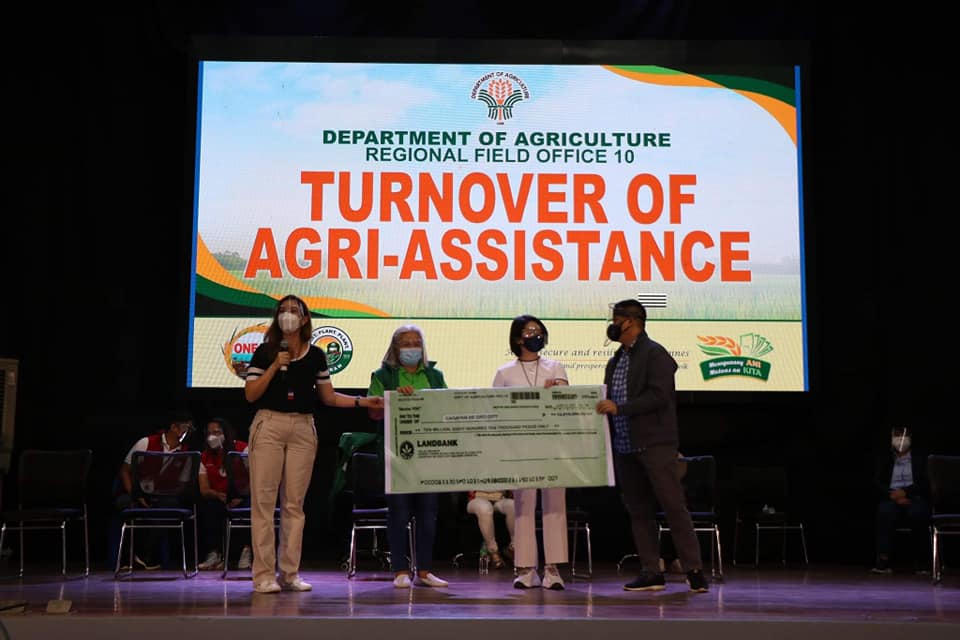 DA-NorMin hands over checks amounting to a total of P17.1-M to local officials of MisOr and CdeO on behalf of the hog raisers affected by ASF.

The ceremonial check turnover was headed by DA Assistant Secretary for Agribusiness and Marketing Kristine Y. Evangelista along with DA-RFO 10 Regional Executive Director Carlene C. Collado and Regional Technical Director for Operations Carlota S. Madriaga during the 123rd anniversary of the Department of Agriculture.

ASec. Evangelista shared, that said indemnity fund will then be distributed to affected hog raisers who will each receive P5,000 per culled hog to recover from the losses brought about by the hog viral disease. # (AMBManto) 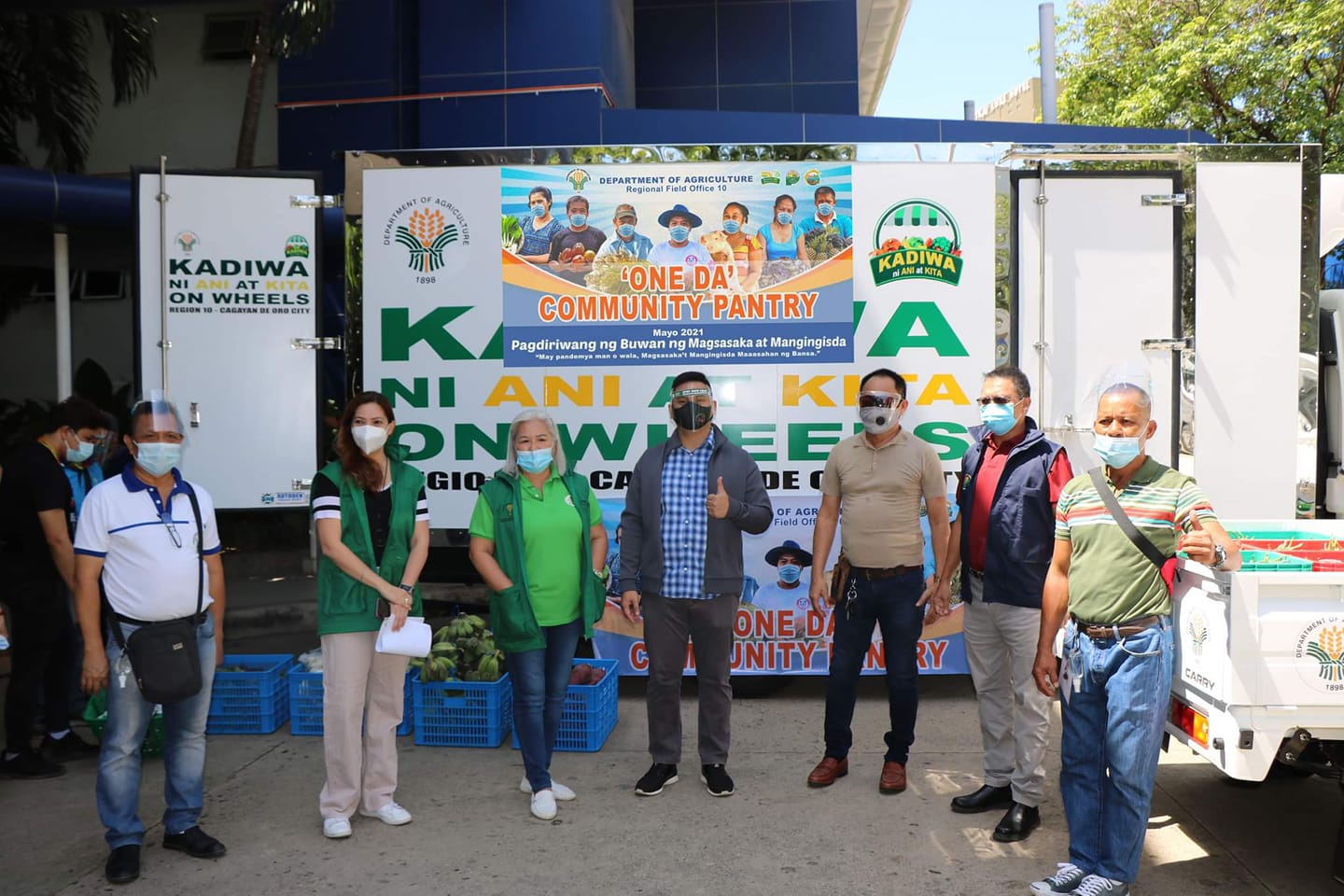 One of highlight activities for the agency’s 123rd anniversary celebration, DA-NorMin turns over 1 unit truck for CAFAMCO under its Enhanced Kadiwa program.

The turnover is one of the highlights of its 123rd Anniversary celebration of DA with the theme, “One DA: Patuloy na nagkakaisa upang iangat ang pambansang agrikultura.”

DA ASec Evangelista said, that the market demands for garden-fresh produce while the department continues its commitment to assist farmer-cooperatives to become competitive which is in line with DA Secretary William D. Dar’s thrust towards increasing farmers’ productivity and profitability.

Lucas W. Faborada, chair of CAFAMCO expressed, that the truck can aid them in their operations, assuring fresh and quality farm produce upon deliveries to their targeted market.

“The truck can increase our margin of profit due to lesser mobilization expense and wider reach of market,” Faborada added.

Said intervention was facilitated to be granted to the Coop through DA-10’s Agribusiness and Marketing Assistance Division (AMAD) of DA-10. # (JCAnito)