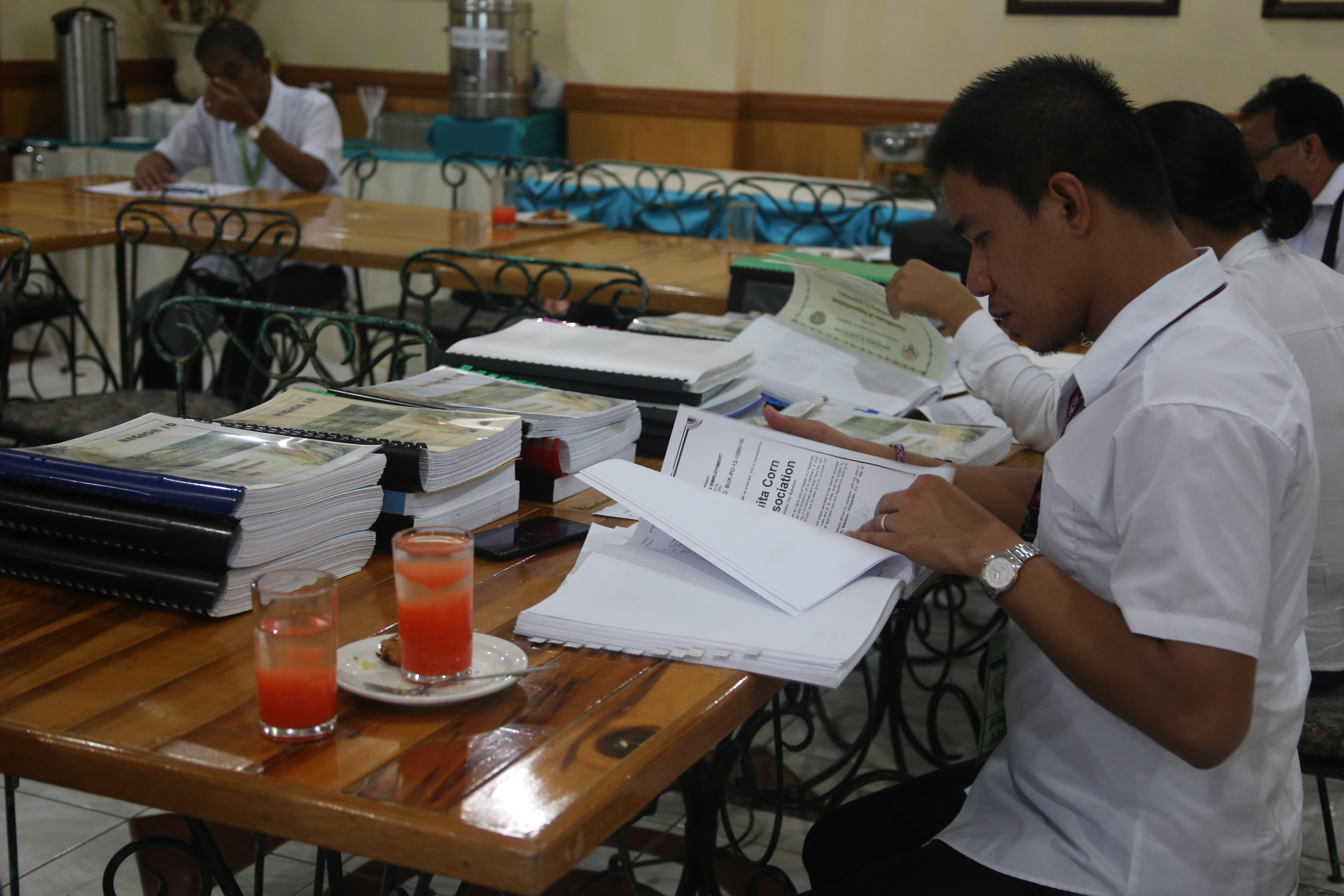 During the event, scrapbooks of the nominees were evaluated for endorsement to the National Search Committee. For the NQCAA, a total of 24 nominees were endorsed, comprising of 18 agricultural extension workers (AEW), three (3) local government units, one (1) corn coordinator, one (1) city agriculturist and one (1) municipal agriculturist. For the CCMEA and Cornupia awards, two (2) farmer organizations were each nominated for both categories.

Meanwhile, the said awards aim to give recognition to the local government units and farmer organizations who have shown excellent performance in the development of the corn and cassava sector in their respective areas. # (AMBManto, DA-RFO10) 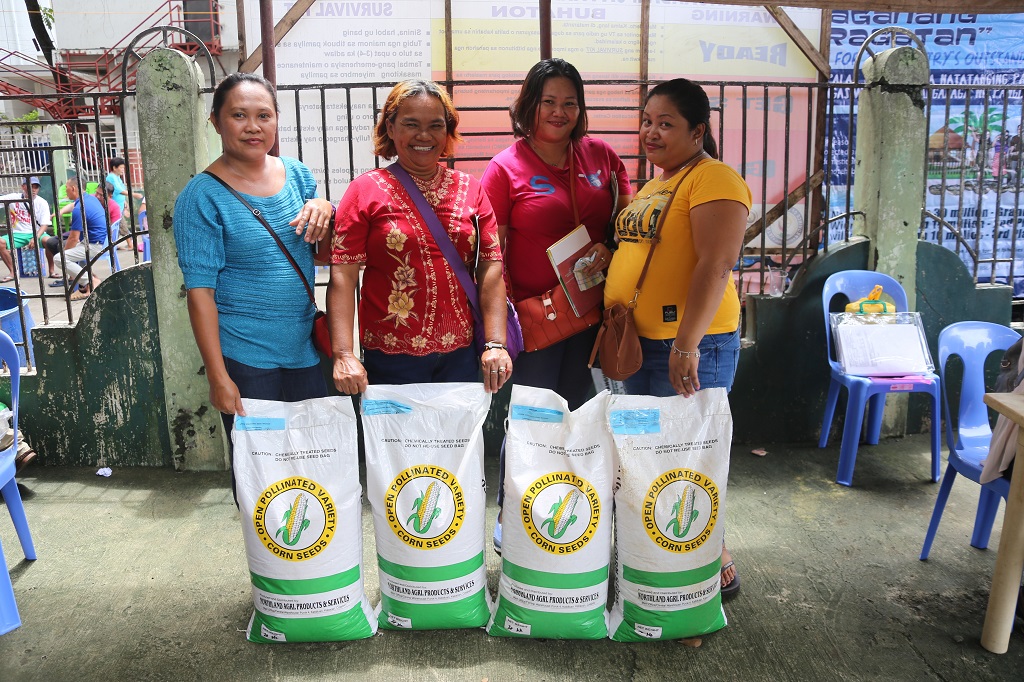 Residents and farmers benefit from the free seeds distributed by the Department of Agriculture – Regional Field Office 10 (DA-RFO 10) during the conduct of the ‘GO Serbisyo para sa Bayan’ caravan on July 13, 2018 held at the Misamis Oriental Provincial Capitol in Cagayan de Oro City.

Around 360 packets of 5-in-1 vegetable seeds (Ampalaya, Eggplant, Okra, Sitao and Squash) were given by the agency through its Provincial Operations Center of Misamis Oriental.

Aside from seeds, farmers also availed of the free information, education, communication (IEC) materials displayed at the booth.

The GO Serbisyo para sa Bayan served as a venue for the public to avail of the free services offered by the different national government agencies. # (AMBManto) 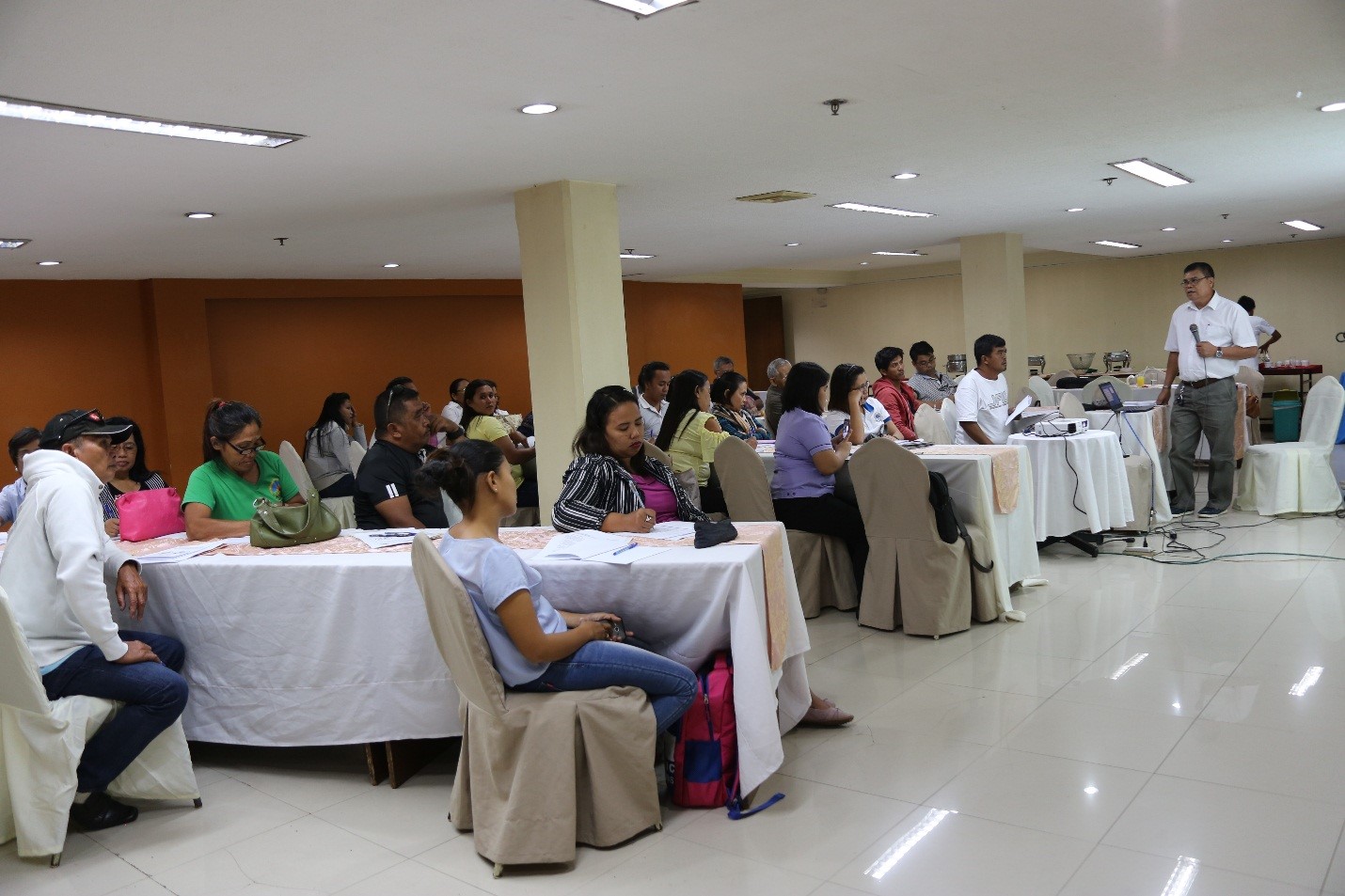 DA-10 Supervising Agriculturist Luisito S. Ofngol discusses the effects of aflatoxins and how it can be prevented during the training for PHILGAP for corn and certification protocols.

The Regulatory Division of DA-10 spearheaded the activity with an aim of imparting knowledge regarding the concepts and principles of GAP, its protocols and certification, food safety act of 2013 and the prevention and control of aflatoxins, which was attended by corn farmers and Agricultural Extension Workers from region 10.

Apart from the discussions, the training also included a mock inspection at Mantibugao, Manolo Fortich, Bukidnon in which the participants were able to go through the checklist for GAP application.

“We expect that through this training, farmers may be encouraged to apply for a GAP certification,” said Christine Jane L. Quiamco, agriculturist II of DA-10. She added that since GAP certified farms follow a set of standards, the certification is a guarantee that their products are safe for consumption and of good quality. # (AMBManto, DA-10) 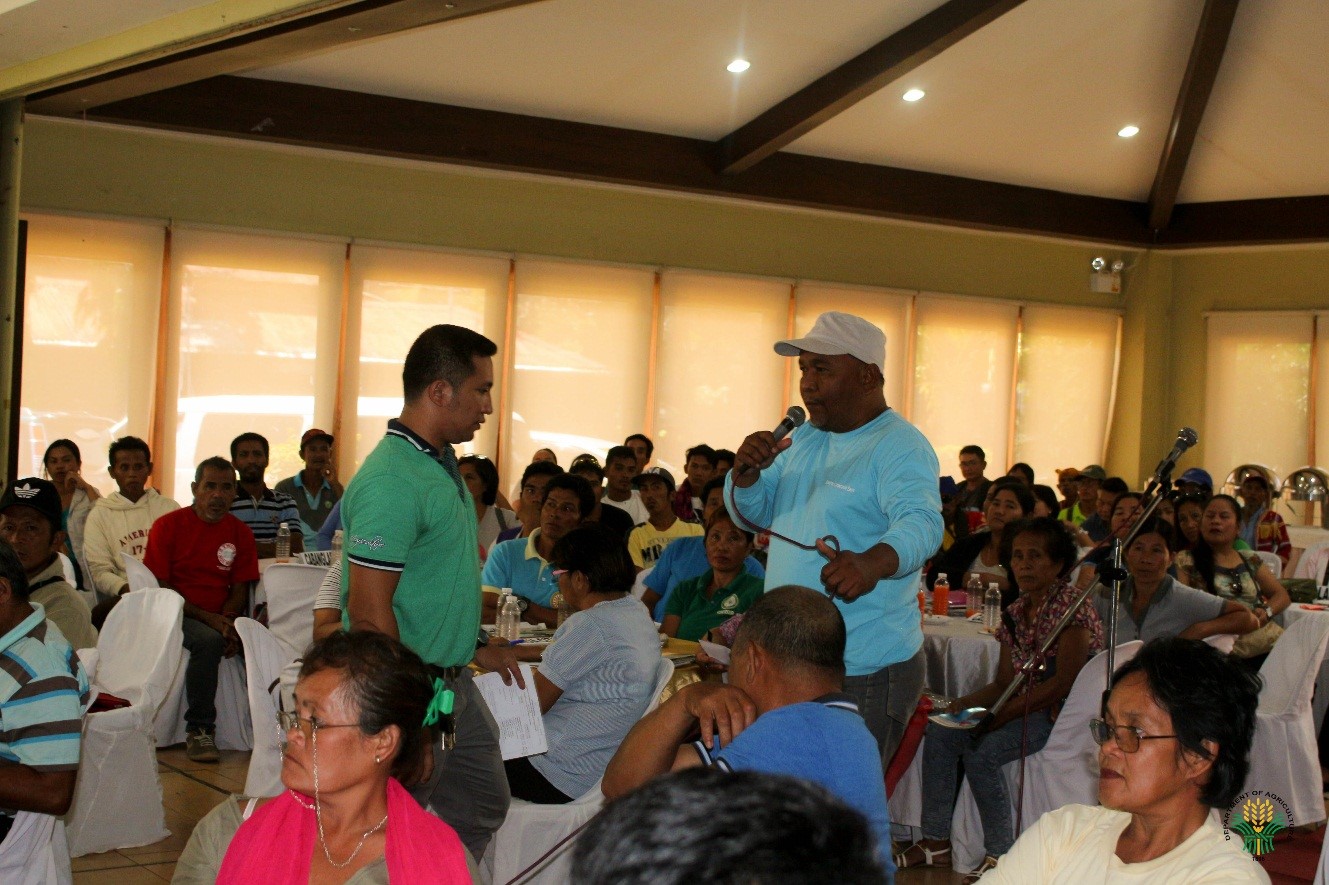 In line with its advocacy of updating farmers and fisherfolk about the programs, projects and services in the agriculture sector, the Department of Agriculture – Regional Field Office 10 (DA-RFO10) finishes its last leg of Information Caravan in the province of Bukidnon on June 22, 2018.

Spearheaded by the Regional Agriculture and Fisheries Information Section (RAFIS) in collaboration with DA’s attached agencies and bureaus and the provincial agriculture and veterinary offices of Bukidnon, around 200 farmers and fisherfolks gathered for the conduct of the event.

Anchored on this year’s theme, “Pagpanguma ug Pagpangisda alang sa Kalambuan sa Panginabuhian,” the said event featured a series of discussions by the representatives of government agencies such as the Bureau of Fisheries and Aquatic Resources (BFAR), Philippine Coconut Authority (PCA), National Dairy Authority (NDA), Philippine Crops Insurance, Corp (PCIC), National Irrigation Administration and the National Food Authority (NFA). After which, an open forum was conducted for farmers to voice out their issues and concerns.

The development of the agri-fishery sector in Ozamis City will soon enjoy a big boost with the Php12.41-million worth of checks turned over by the Department of Agriculture – Regional Field Office 10 (DA-RFO 10), today, June 18, 2018 at the agency’s compound, in the city of Cagayan de Oro.

Funded under the Bottom-Up Budgeting program, the amount transferred will fund the following projects: Slaughterhouse Building Repair and Upgrading of Facilities (Php3M), Establishment of Village-Type Post-Harvest Facilities (Php3M) and Mechanical Dryer (Php600,000), and the Construction of Palay Shed (Php450,000). 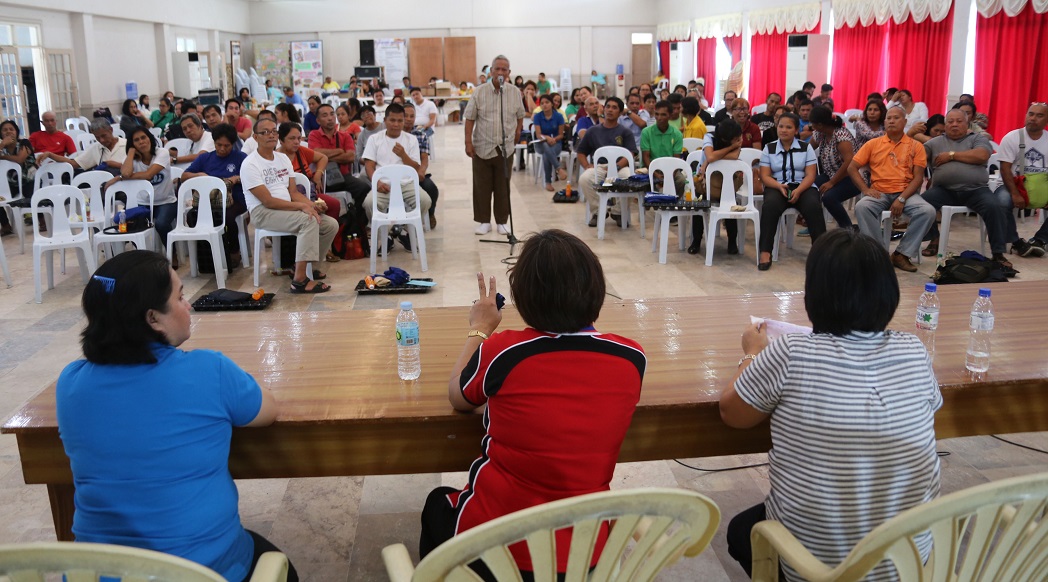 Mambajao, Camiguin – With the aim of conveying the right information of the programs, projects and services of the Agriculture sector, the Department of Agriculture Regional Field Office 10 (DA-RFO 10) along with its attached bureaus and agencies as well as the provincial agriculture and veterinary offices conducted an Information Caravan on June 7, 2018 in the province.

Spearheaded by the Regional Agriculture and Fisheries Information Section (RAFIS), the said event follows the 1st and 2nd leg of information caravans in the provinces of Lanao del Norte and Misamis Occidental, on May 29, 2018 and May 31, 2018.

With this year’s theme, “Pagpanguma ug Pagpangisda alang sa Kalambuan sa Panginabuhian,” around 200 farmers gathered in the event which featured a lecture by the representatives of the different government agencies and an open forum for farmers to raise their issues and concerns.

One of the questions asked was regarding the extent of crop damage that the Philippine Crop Insurance Corporation (PCIC) covers. With this, Insurance Underwriter Ruth C. Capinpuyan explained that “the crop damage should be more than 10 %, below 10% is considered no loss, thus non-compensable.”

The event was also graced by Mambajao Mayor Jurdin Jesus M. Rumualdo who encouraged the farmers to actively participate in the event. He further promoted organic agriculture as a way of farming, explaining that through this, we can prevent synthetic fertilizers and chemicals from flowing to the oceans and destroying the corals. 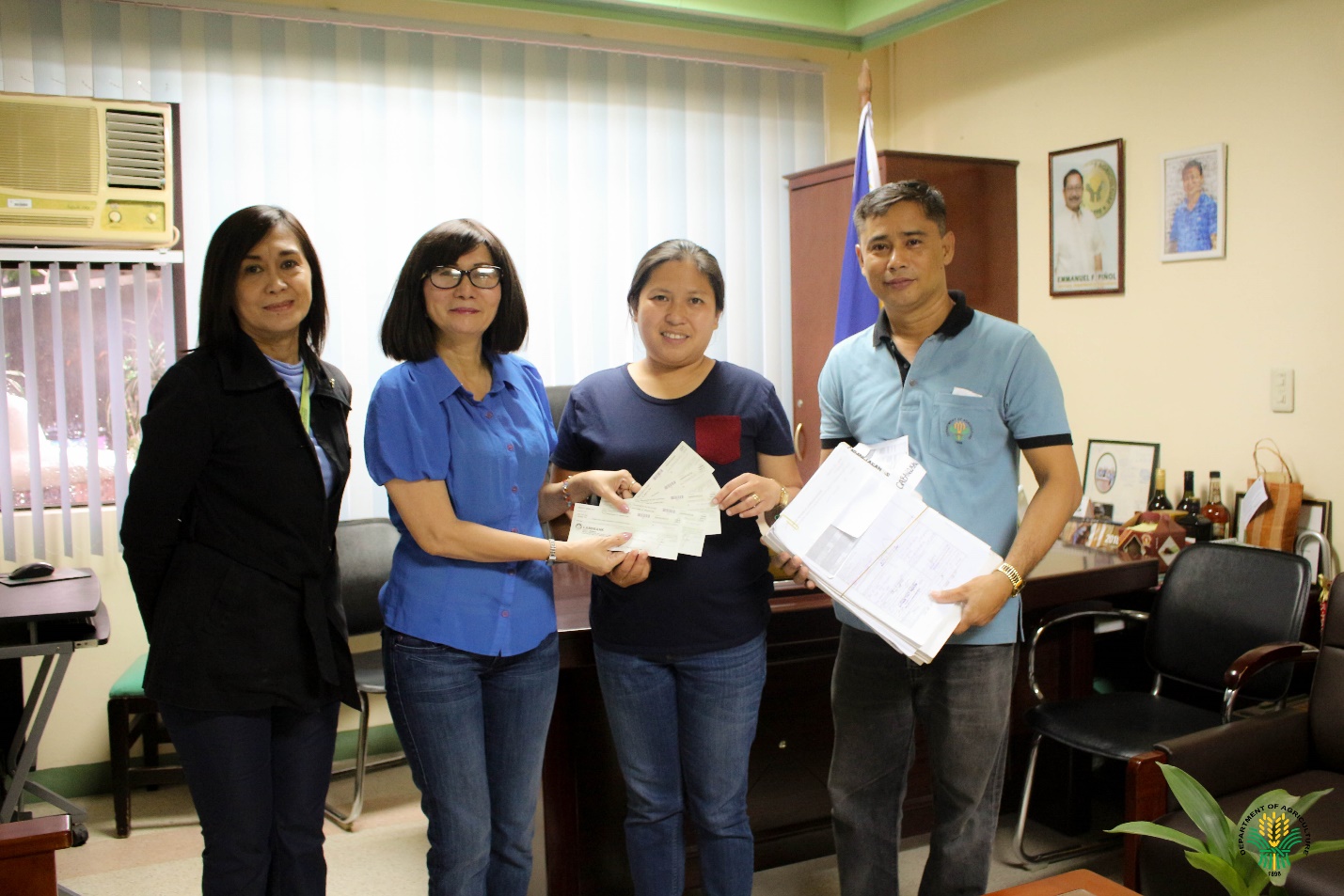 Spurring the agri-sector in Cabanglasan, Bukidnon is further given a boost, with the checks totalling to Php5,714,708.95, for the implementation of various Bottom-Up Budgeting (BUB) and Rice Program projects under the Department of Agriculture – Regional Field Office 10 (DA-RFO 10).

Under the Rice Program, the amount of Php2,755,453.96 is the second tranche fund release for the implementation of the Small Water Impounding Project of the Cabanglasan Small Water Impounding Management Beneficiaries Association, covering 82 hectares of rice areas while the Php 1,169,254.99 is for the improvement of the Mandahican Diversion Dam and Php240,000 for the 2 units Small Farmer’s Reservoir for the Barangay Mandahican Farmers and Laborers Association, Inc., cultivating 57 hectares of rice areas.

Implementation of BUB projects will also soon be underway with the Php325,000 for the distribution of 105 heads of goat for the senior citizens of the 15 barangays of the municipality, Php325,000 for the organic fertilizer production facilities and Php900,000 for the construction of bodega with solar dryer for the Iba Agrarian Reform Beneficiaries Association, Multi-Purpose Cooperative.

With the above interventions, DA eyes for the farmers and residents of Cabanglasan to augment their productivity and improve their postharvest operations while gaining access for source of employment and income. # (JLOlson) 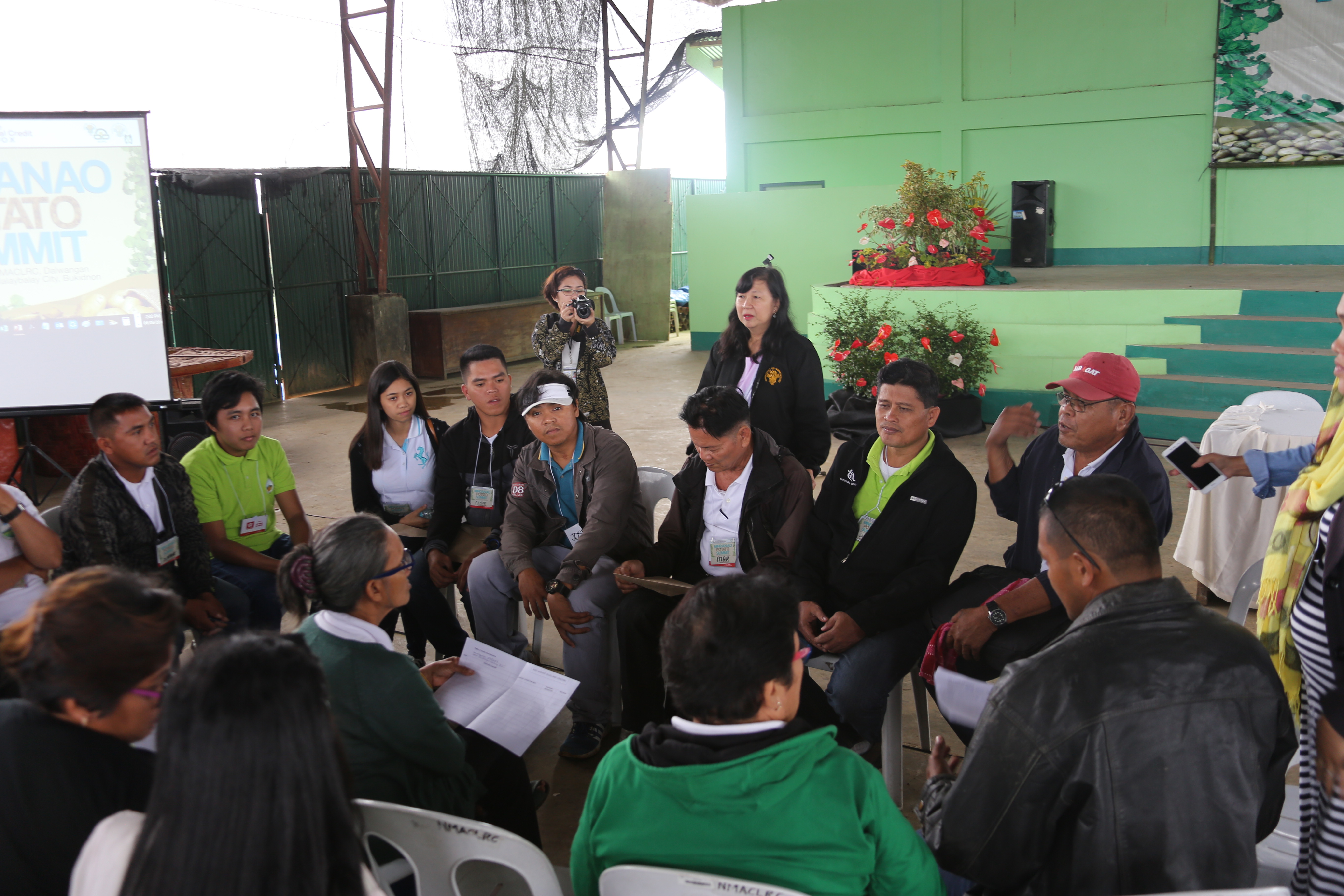 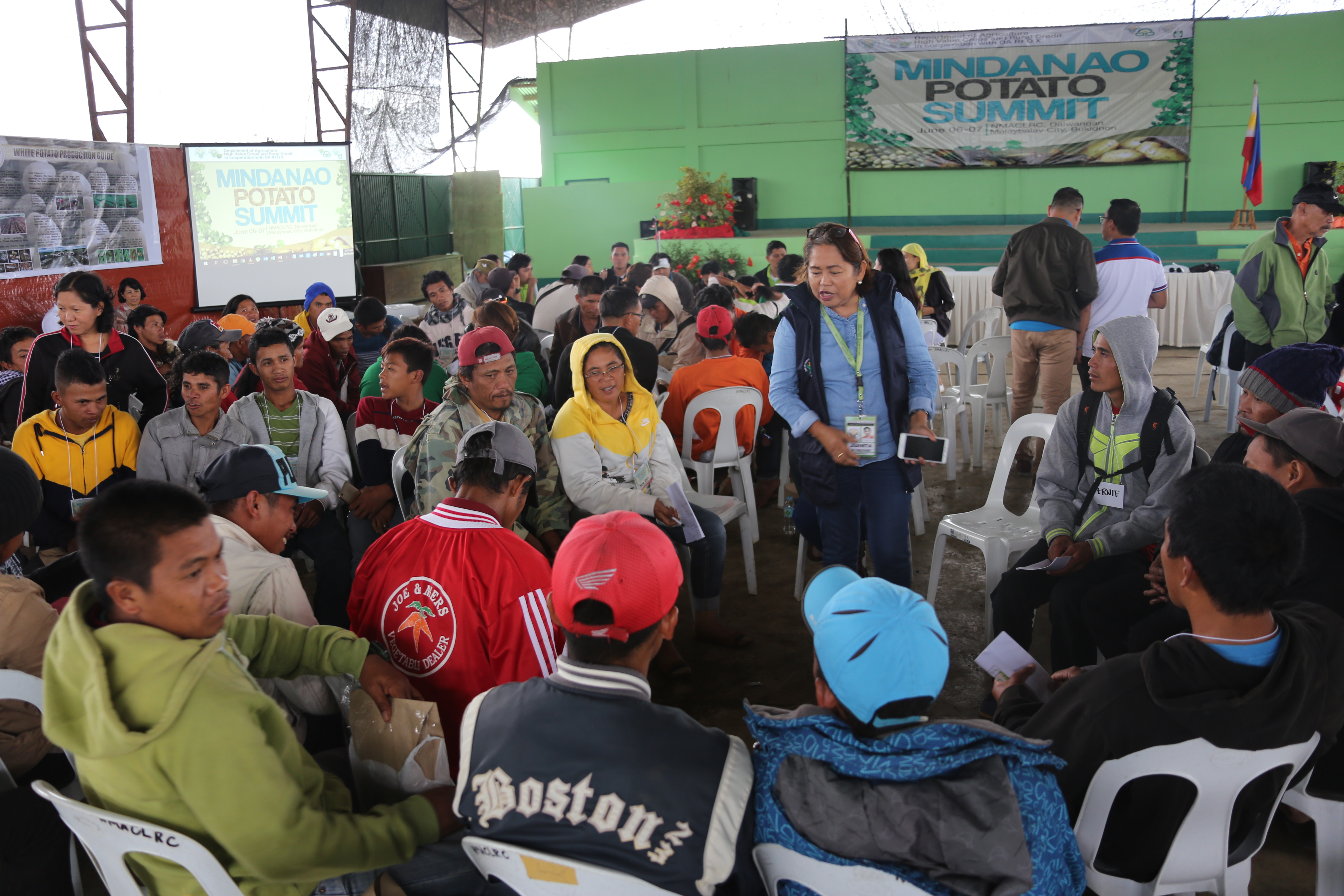 Delegates of the 1st Potato Summit breaks into groups to discuss their personal challenges and successes in growing potatoes. Making her rounds during the breakout sessions is DA Usec. Laviña (top photo) and Juanita B. Salvani (bottom), research division chief of DA-RFO 10.

This was the key message of the Department of Agriculture (DA) Undersecretary for High Value Crops and Rural Credit Evelyn G. Laviña during the conduct of the first ever Mindanao Potato Summit on June 6-7, 2018 at the Northern Mindanao Agricultural Crops and Livestock Research Complex, in this town.

Gathering nearly 300 participants, the activity was primarily undertaken to solicit inputs from actual potato growers that would form part of the crafting of a five-year road map for the country’s potato industry. This was done through breakout sessions by the participating farmers and agri-extensionists coming from Bukidnon’s potato producing city and towns such as Malaybalay, Lantapan, Talakag, Impasug-ong and Maramag.

“It is my moral obligation to provide affordable and available food for the Filipino people,” the undersecretary quoted President Rodrigo R. Duterte, adding that the president has instructed in avoiding activities which are not anchored on the department’s fundamental directive.

Accordingly, the road map will serve as a blueprint in furthering the potato industry, reflecting the challenges and proposed actions towards resolving these. Issues raised include the limited supply of disease-free potato seeds, low productivity, high incidence of bacterial wilt, among others.

She also urged in strengthening farmers’ cooperatives, saying that aside from buying the harvest of its members, they can also venture into producing potato seeds and even extend transportation services; thereby enabling their group economically while greatly helping farmer-members, at the same time.

By doing so, USec. Laviña underscored that it will empower them to sustain their operations, especially in their production of quality potatoes, stating that despite the inevitable changes in the administration, they can still ably continue to exist.

As of 2014, reports have shown that Northern Mindanao contributed to national potato output, registering 537 hectares of potato production areas, producing 6,145 metric tons in volume and posting an average yield of 11.44 metric tons.

Setting up support systems for the potato farmer-delegates, the summit tackled on the overview of the potato industry at the national and regional levels, potato seed system as well as the 2018 interventions for potato, comprising of credit programs, crop insurance, and business opportunities.

Given the high demand for potatoes both for fresh/table and the processing types, including its recognition of being a substitute staple food, the undersecretary concluded that, it would not be far that farmers will soon be successful in their respective ventures, as long as they have the quantity and quality in the production of their potatoes, coupled with having the heart for farming. # 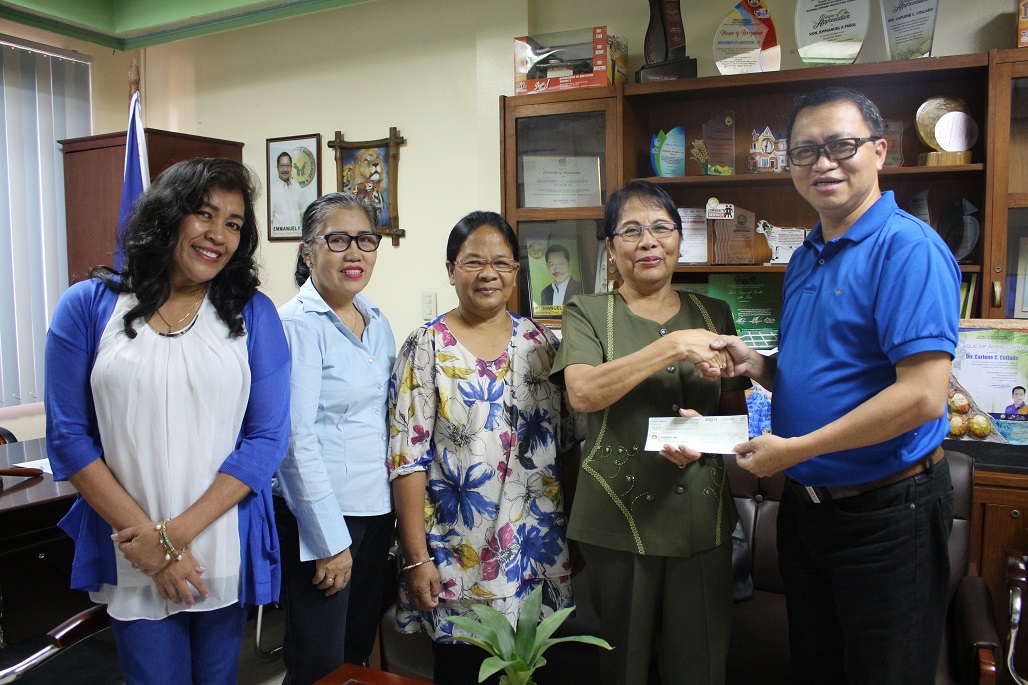 Funded under CY 2014, a portion of the amount will be utilized for the labor and materials for the construction of 4 units 10m x 10m bamboo fixed cages, costing at Php262,294 each. Also covered will be the provision of bangus fingerlings and feeds, fabrication of nets, and installation of bamboo fences and caretaker’s hut. Meanwhile, the rest will be apportioned for the labor and materials for the fabrication of 4 units non-motorized banca, each amounting to Php12,928. Bringing public service closer to the people, the Department of Agriculture – Regional Field Office 10 (DA-RFO 10) distributed an estimated Php111,200 worth of seeds to the residents and farmers of El Salvador City, Misamis Oriental (MisOr) during the conduct of the GO Serbisyo Para sa Bayan on June 2, 2018 at the Molugan National High School. Through its Provincial Operations Center of MisOr headed by Nilda B. Salas, the agency distributed around 400 packets of 5-in-1 vegetable seeds (okra, sitao, squash, eggplant and ampalaya) and raffled off 20 bags at 20-kilogram per bag Open Pollinated Variety corn seeds and 20 bags at 40-kilogram certified rice seeds. # (JLOlson)