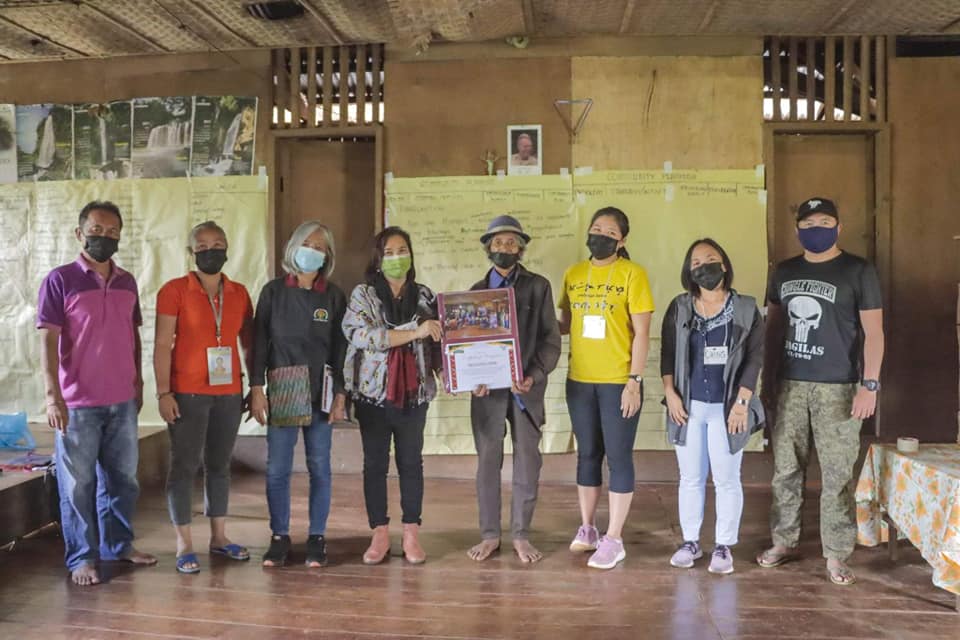 The Department of Agriculture-Regional Field Office 10, through the Kabuhayan at Kaunlaran ng Kababayang Katutubo (4Ks) Program, conducted a Community Needs Assessment (CNA) to the Higaonon tribe of Mintapod in Hagpa, Impasug-ong Bukidnon on May 24-27, 2021.

“We will be gathering data directly from our beneficiaries through a series of activities in order to gauge what interventions can be given to them and identify what are the available resources in their area. We also tapped the help of Philippine Fiber Industry Development Authority (PhilFIDA) because a lot of women in Mintapod are weavers of abaca fiber.”

“As someone who is from Mintapod, I always hear complains about the government not reaching our areas and focuses only to those who are easy to access. Now, we are being visited by DA because they want to give projects in our community. I would like to request for everyone’s cooperation and have an open mind with the ideas and interventions being presented because this is what they think can help us. Soon, we will achieve peace and development.”

After the said activity, a written report containing the findings will then be submitted to DA-10 Regional Executive Director Carlene C. Collado for further action.

4Ks is a three year special project of the DA where it provides assistance to the Indigenous Cultural Communities (ICC) and Indigenous Peoples (IP) in the form of agricultural and fisheries related livelihood opportunities. It aims to capacitate the IPs through community organizing, agricultural skills training and workshops to increase knowledge and productivity. 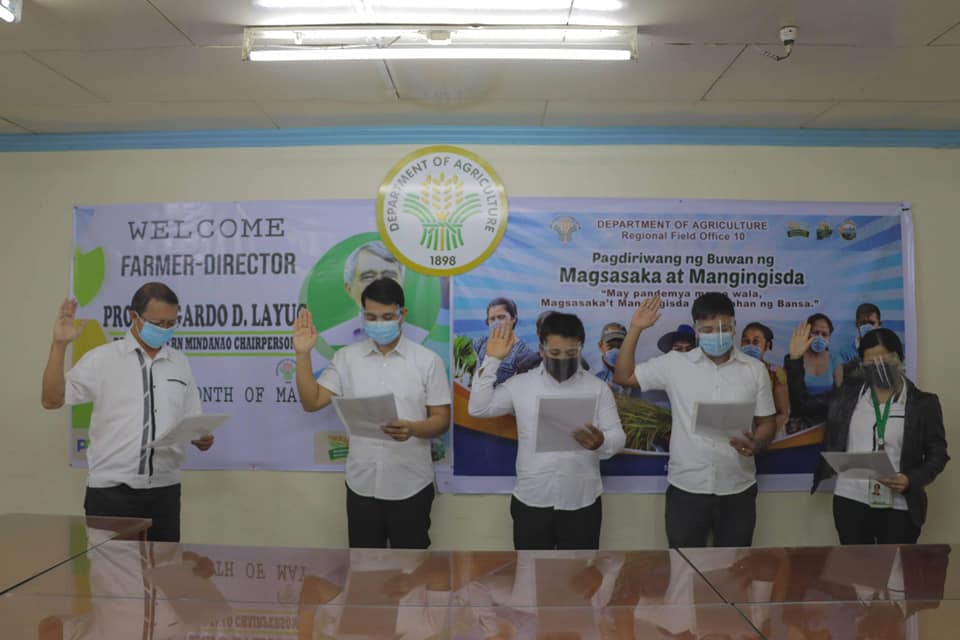 RED Collado administers the oathtaking ceremony for DA-10’s newly promoted and appointed personnel on May 31, 2021 at the agency compound in CdeO City.

CAGAYAN DE ORO CITY – Three newly appointed and one newly promoted individuals will be added to the workforce of the Department of Agriculture – Regional Field Office 10 (DA-RFO 10) as they took their oath of office on May 31, 2021 in this city.

The following are the newly promoted and appointed DA-10 personnel with their corresponding positions and assignments:

DA-RFO 10 Regional Executive Director Carlene C. Collado administered the ceremony together with the respective section chiefs of the newly sworn as witnesses. # (CRSeraspe) 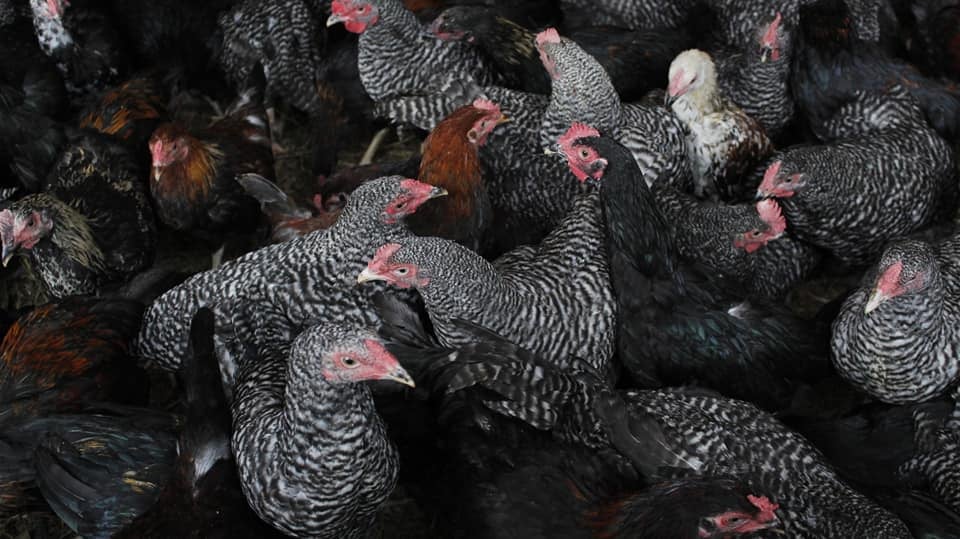 MALAYBALAY CITY, BUKIDNON – In the continued support of the Department of Agriculture – Special Area for Agricultural Development (SAAD) to the COVID-19 Response in Northern Mindanao, at least 548 heads of Free Range Chicken (339 male and 209 female) were partially delivered to DA-10’s research station amounting to P440,000.00 under SAAD FY 2020.

The Multiplier Farm aims to initiate the chicken dispersals to SAAD covered municipalities in Northern Mindanao. 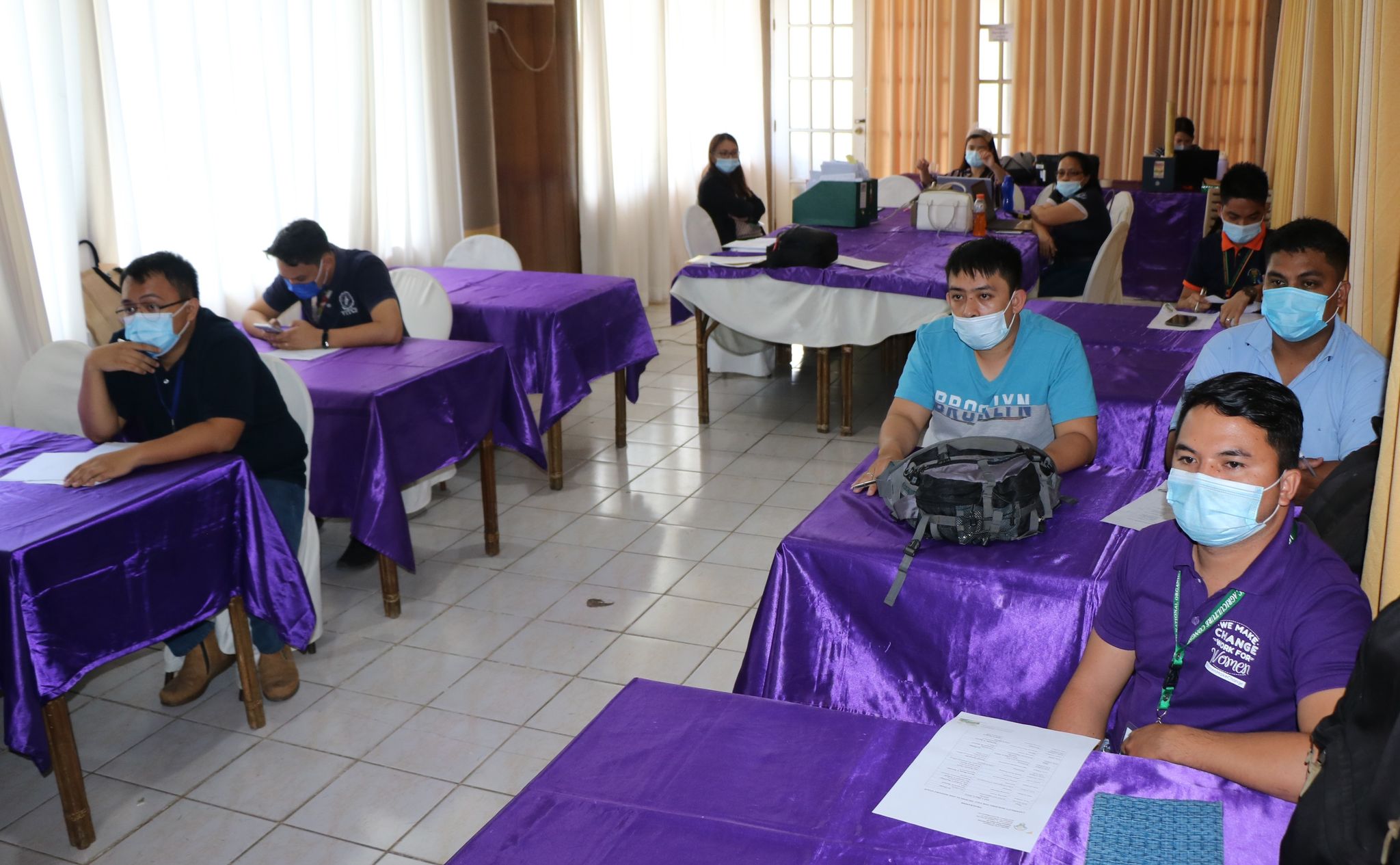 DA-10 F2C2 program technical and support staff undergoes a training on Bookkeeping and Business Plan preparation for them to re-echo the knowledge to select FCAs from the different provinces in Region 10.

DA-RFO 10 Field Operations Division OIC-Chief Audy G. Maagad said, the two-day training will capacitate the technical team on the Basic Bookkeeping and Business Plan Preparation in order to re-echo the knowledge to select farmer’s and fisherfolk’s cooperatives and associations (FCAs) from the different provinces.

Maagad remarked, that aside from the agri-interventions provided by the department, there is a need to reinforce on the fundamentals of entrepreneurship to aid in augmenting the revenues of FCAs and other relevant stakeholders.

According to Engr. Santander, it is important to build a stronger relationship among affiliate cooperatives in value chain promotion and to set a commitment in attaining sustained enterprises.

With the capabuild, DA-10 F2C2 Focal Person Gay Nanette Aleria hoped for said activity to add to their current roster of skills as they will be deployed in their areas of assignment and eventually, come up with a farm cluster development plan.

Under Administrative Order No. 27 of DA, the F2C2 program will help the government in providing assistance such as credit, modern production methods, farm machinery, post-harvest and program facilities, transport and logistics, packaging support, as well as information and communication technologies, to farm and fishery clusters. 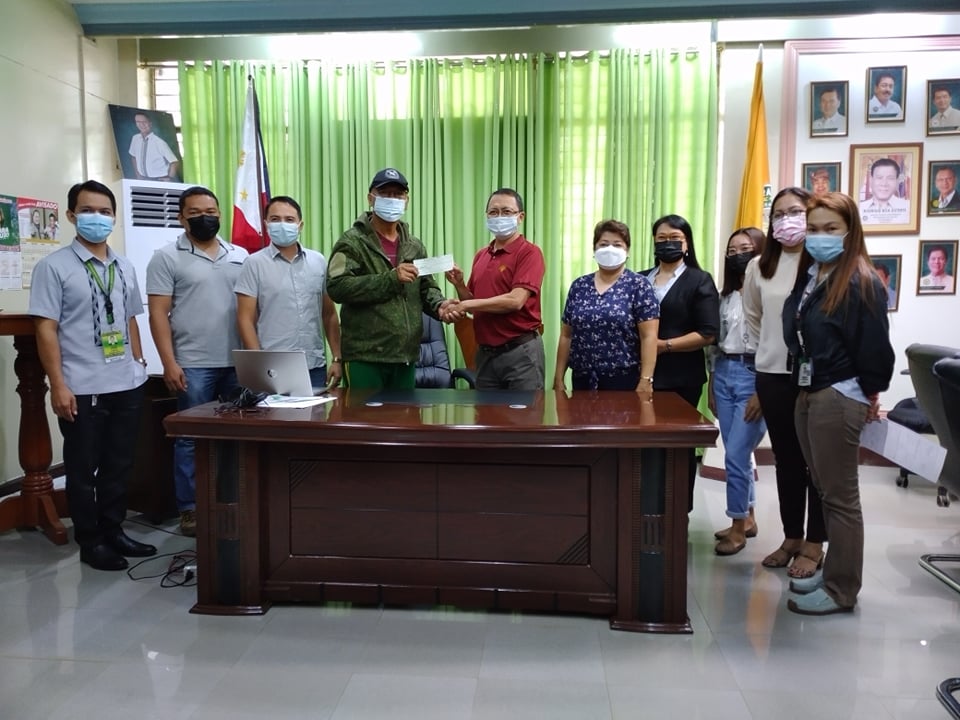 CAGAYAN DE ORO CITY – The Department of Agriculture in Region 10 has turned over P5 million worth of check for the implementation of massive seedling project to Central Mindanao University (CMU) in Musuan, Bukidnon.

DA-10 Regional Executive Director Carlene C. Collado said, the project intends for productivity enhancement of the farmers in the region.

A seed processing facility will be established that will produce 400 kilograms of pinakbet seeds or 80 kilograms each of ampalaya, squash, okra, string beans and eggplant commodities.

A fruit nursery will also be established for 50,000 hills of grafted planting materials of different durian varieties for distribution to farmers and other stakeholders of the region.

CMU under the helm of President Jesus Antonio G. Derije is an academic paradise in the south, and the center for excellence in agriculture. 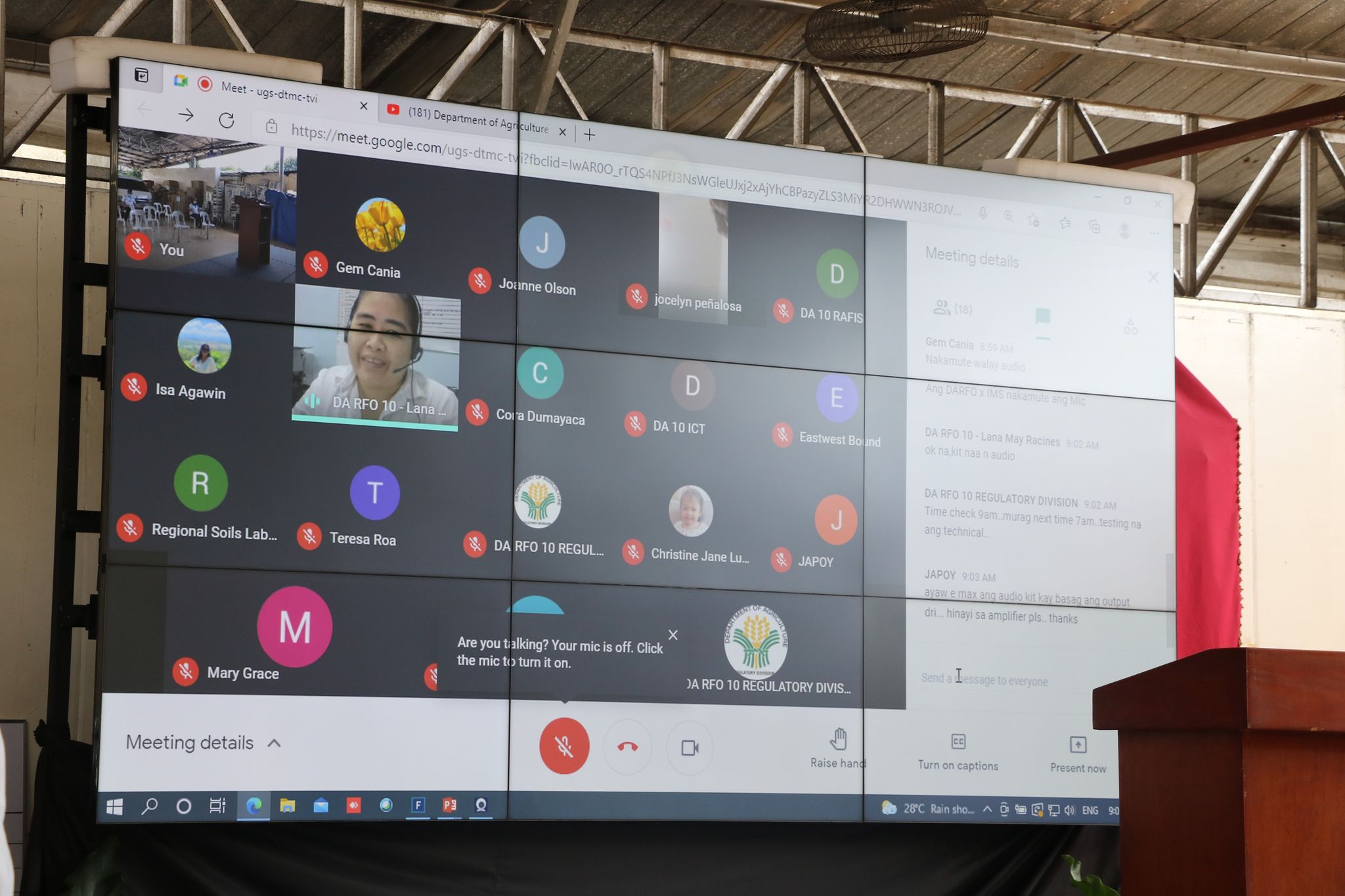 During its Monday Mini Program on May 24, DA-NorMin recognizes the efforts of its food security partners in time this Farmers and Fisherfolk’s Month.

Said initiatives, in particular, are the ‘One DA’ Community Pantry and Kadiwa ni Ani at Kita at Diskwento Karavan (KDK) which were undertaken thru a collaborative effort among DA-10, its attached bureaus and agencies, and the private sector.

In recognition for their invaluable contributions, certificates of appreciation were given to the mentioned partners on May 24 during the agency’s Monday Mini program.

Recipients were the following:

DA-10 supports DAR’s FBS program as it recently provides them with packets of assorted veggie seeds.

The FBS, which started in 2017 is DAR’s initiative to boost the entrepreneurial skills of farmer-beneficiaries by enhancing their capabilities in managing their produce to optimize profitability.

Gallamoso said, the vegetable seeds will be grown in their one-hectare demonstration farm, and the rest will be distributed to its 35 farmer-students of the FBS in Brgy. Aya-Aya, Lugait, Misamis Oriental. 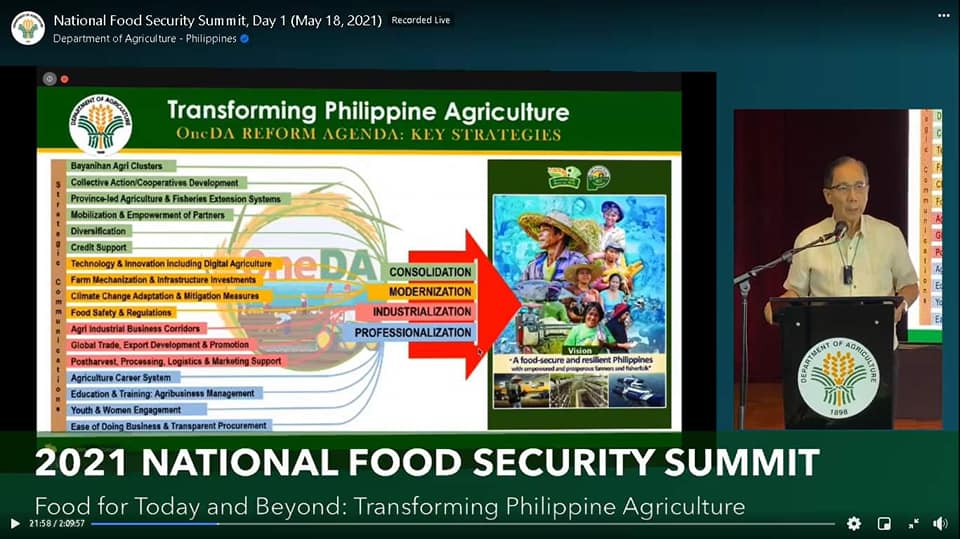 The aggie dept stages the NFSS to solicit doable strategies and policy recommendations to help the agri-fishery sector overcome its challenges as well as update commodity industry roadmaps and craft the country’s food security blueprint.

Serving as the culmination of the regional summits held in April and May, the Department of Agriculture (DA) staged the two-day 2021 National Food Security Summit (NFSS), held at the BSWM Convention Hall, Elliptical Road, Diliman, Quezon City and via virtual platform.

“A pandemic with devastating impact on global health continues to ravage economies and societies, threatening to put more people into extreme poverty, and many more into chronic hunger and malnutrition.

Likewise, he noted, these will impact the nation’s ability to feed its growing population and in bringing about meaningful progress in the countryside now and in the future.

“Therefore, it is imperative to sustain and strengthen our food production, distribution and logistics systems to ensure that the COVID-19 pandemic and natural and man-made disasters do not threaten food security and nutrition, and improve resilience to future shocks,” the DA chief underscored.

Drawing about 15,000, including from the Northern Mindanao region, the NFSS gathered a myriad of participants, from the national and local government agencies, international organizations, the private sector, farmer’s cooperatives and associations, agricultural and fishery councils, non-governmental and civil society organizations, youth and the academe.

Of which, they have witnessed talks from different homegrown food security experts and from abroad, including benchmarking from shared stories of key officials, successful farmers, fishers, agripreneurs and the youth.

Accordingly, with the NFSS outputs, Sec. Dar said, these will accompany the agency’s One DA reform agenda, which is anchored on the four major pillars – consolidation, modernization, industrialization and professionalism – along its various key strategies underneath.

The agriculture secretary likewise emphasized, that the department will continue to implement the Plant, Plant, Plant program under the current administration, which scales up the sustainable production of basic food commodities.

“We continue to build the foundation to make farming and fishing more productive, profitable, sustainable, and globally competitive,” the DA official added.

Also attributing its positive growth during the second and third quarters of last year, the DA chief deemed that the agri-fishery sector is a key in reviving the Philippine economy, especially so with the strengthened discussions on Public-Private-People Partnership and Province-led Agriculture and Fisheries Extension System during the two-day summit.

This year, DA aims to attain a modest record of 2.5% growth for the agriculture sector. # 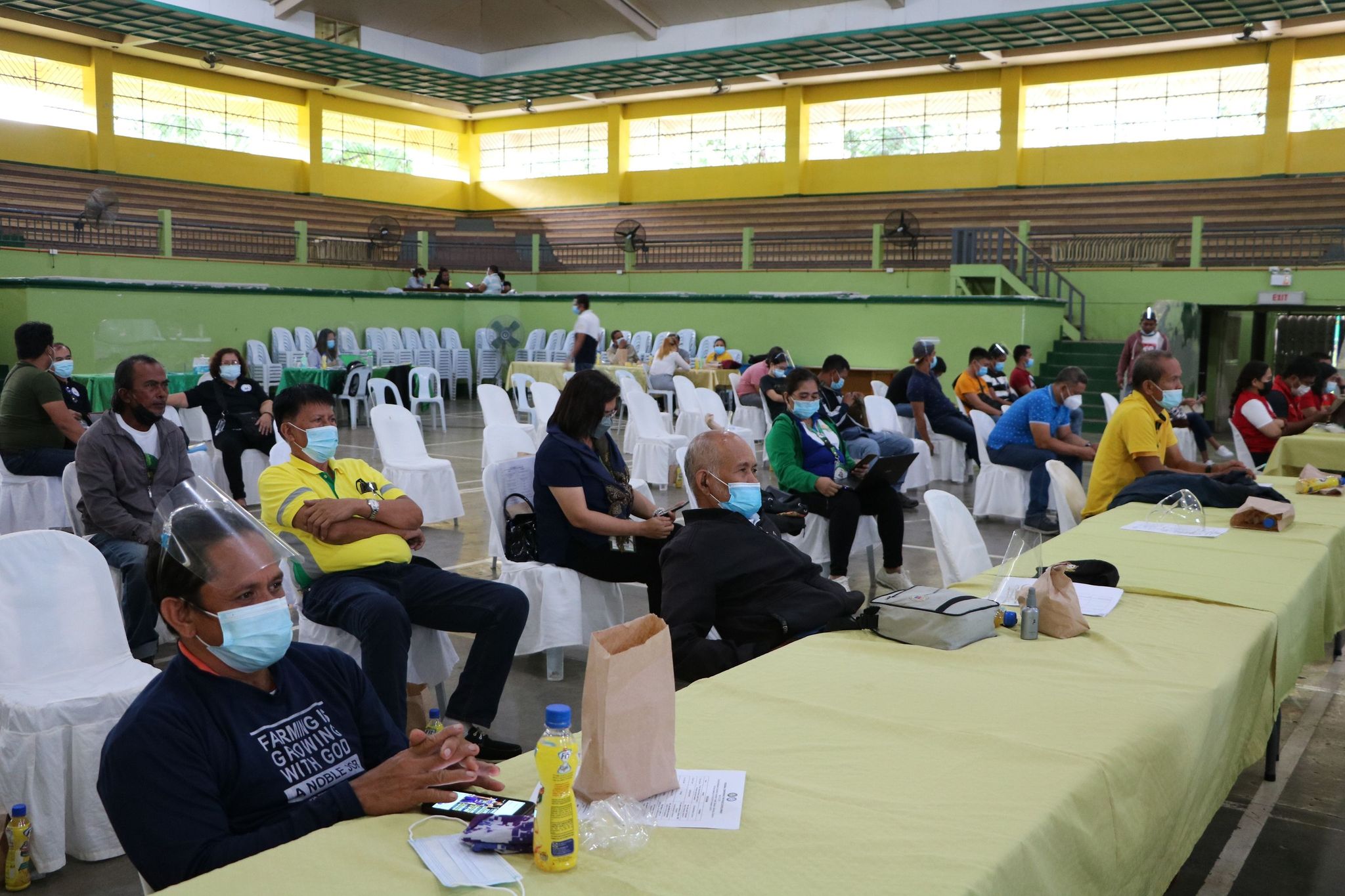 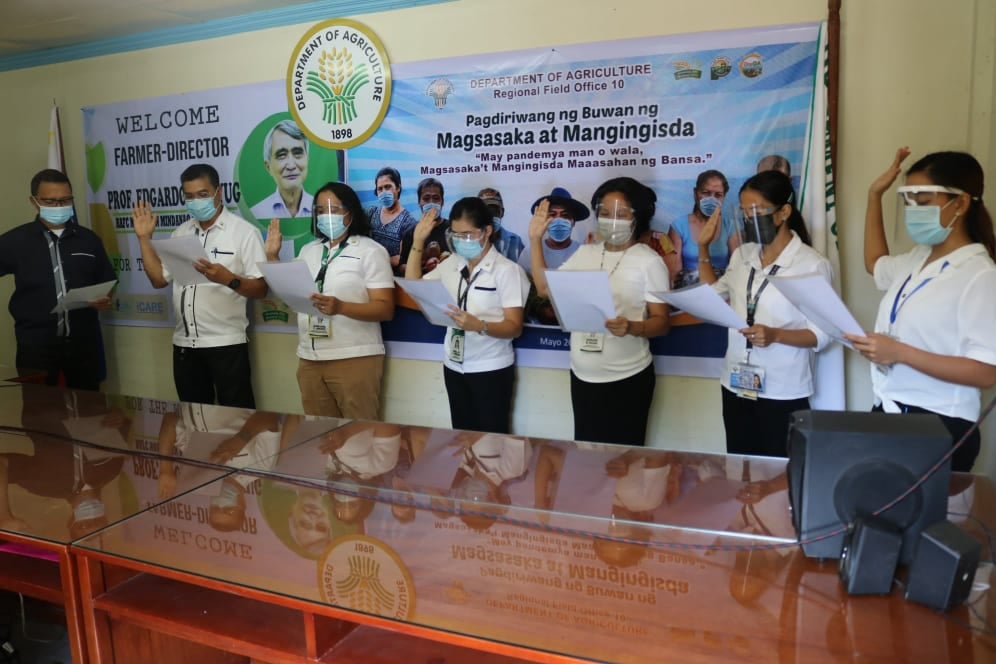 CAGAYAN DE ORO CITY – Six newly promoted and two newly appointed employees of the Department of Agriculture – Northern Mindanao (DA-10) have been sworn into their newly promoted positions and appointments.

RED Collado reminded the newly promoted employees, marking the fourth batch this year, to continue of help in delivery of efficient and effective programs, projects and interventions for the farmers and fisherfolk regionwide.

“Every one of you is an essential part of the (DA) system, and we expect for you to do your best in delivering agri-services to our clienteles,” the director conveyed.

The newly promoted and appointed DA-10 personnel with their corresponding positions and assignments are the following:

Also witnessing the rite are DA-10 Regional Technical Director and Placement and Selection Board Chair Carlota S. Madriaga and other PSB members and DA-10 staff. # (JCAnito)